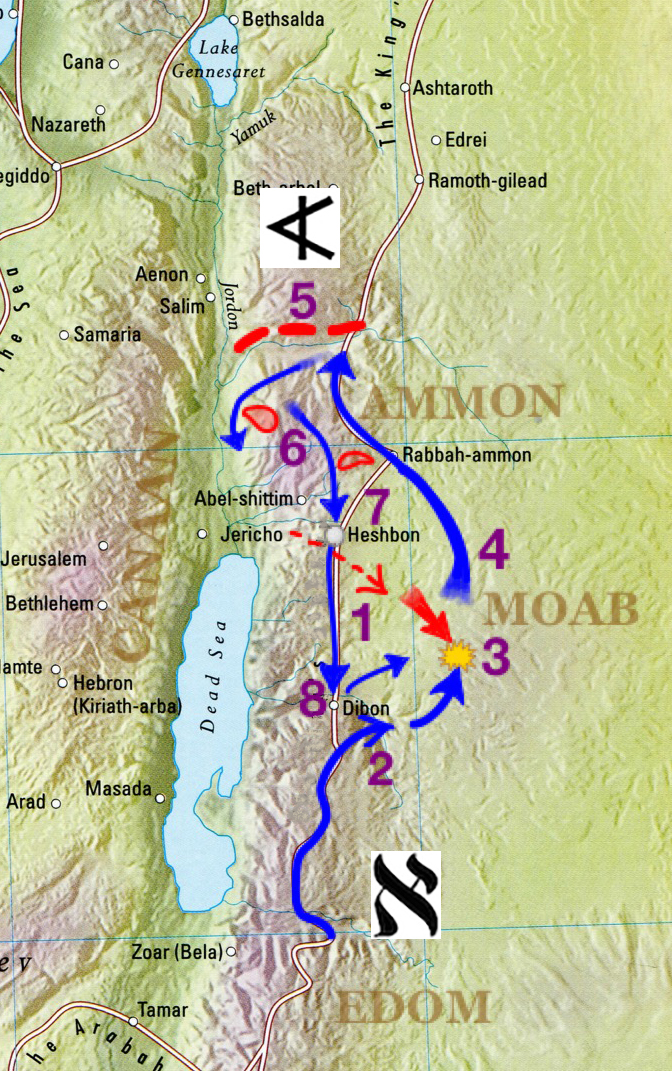 Israel defeated a mighty enemy that seemed indestructible. This added to the new nation’s growing fierce reputation that began spreading into Canaan even before they crossed the Jordan. Most of Deuteronomy is made up of addresses that Moses makes to the people before their invasion to capture the Promised Land. 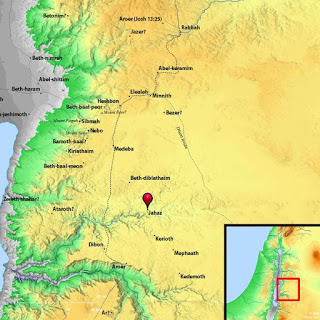 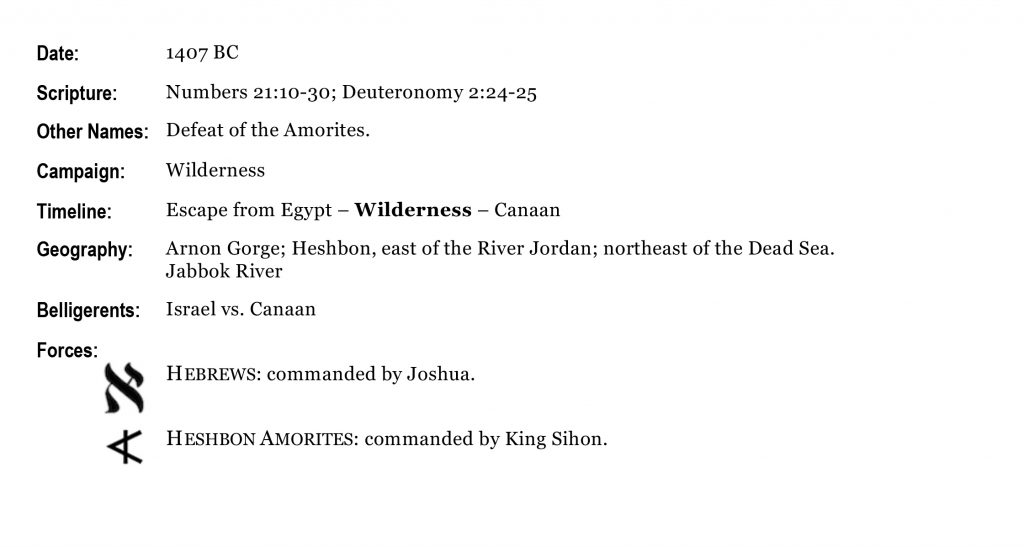 ANCIENT HISTORY before the Battle of Jahaz

The first Kingdom of Babylon (1668-1361 BC) was the greatest power in the then Middle Eastern region. Nevertheless, there were many smaller kingdoms to the West of it that the Hebrews came in contact with.

The Amorites were one such peoples who’s territory the Hebrews entered. They were a formidable foe. The name comes from Egyptian “Amar” (Marduk) name for their God. They were an ancient Semitic-speaking people reaching from Syria to southern Mesopotamia. Their origin is around 19th Century BC in today’s Northern Syria. They were nomadic and could not take an empire head on but successfully encroached onto lands from the kingdoms of Assyria, Sumer and Elam throughout the ages. The Amorites took advantage of the gradual collapse of the Neo-Sumerian Empire to move into new regions.
Their key distinction among other 19th Century Middle Eastern people is the establishment of the first city-states, the most prominent being Babylon. Like the Hittites were to Egypt, the Amorites posed a continuing threat to other kingdoms and especially Assyria. In 1792 BC the Elamites defeated the Third
Dynasy of Ur.  Amorite warrior Hammurabi of Babylon came into power around 1565 BC and ruled over Babylon and Mari. During this period the Amorites became stronger than ever in their incursions against the Assyrian monarchy that would eventually see its throne taken over by an Amoriteleader. The Assyrians would be ruled by Amorites, one being Shamshi-Adad I in 1564 BC which created the state of Ashur. 1. 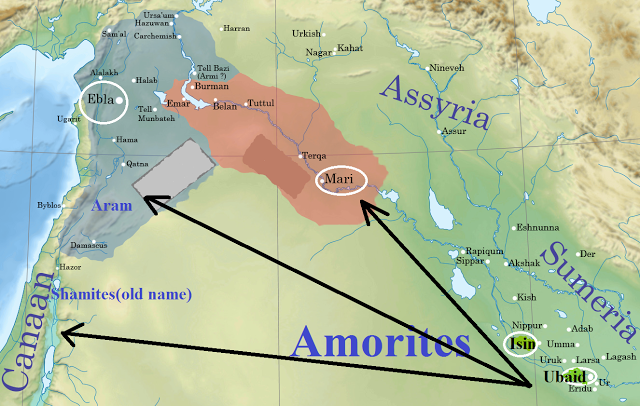 CONFLICT BACKGROUND leading to the Battle of Jahaz

In the early 1400s Sihon was king of the Amorites. He had fought against the former king of Moab and had taken from him all his land as far as the Arnon. He would not tolerate his recently gained territory to be taken over by Israel.

The Hebrews marched purposefully through the wilderness of Moab (modern country of Jordan) towards their strategic objective: the area which they would use to prepare for the invasion of the Promised Land, a point north of the Dead Sea.

This was their course: 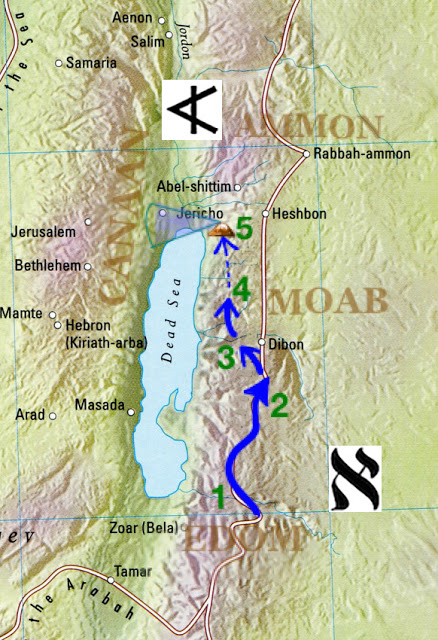 MILITARY HISTORY of the Battle of Jahaz 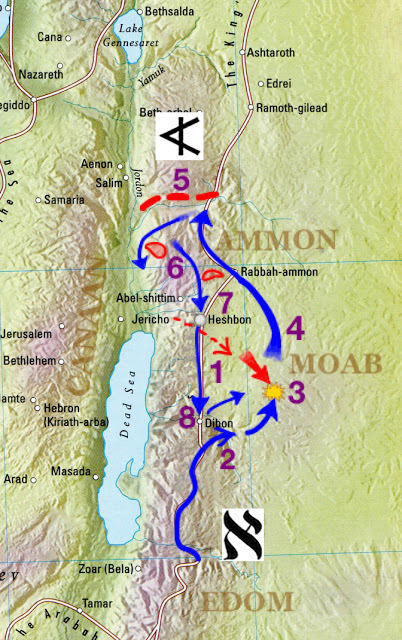 The Hebrews would have gone straight north if Sihon had not opposed them. He attacked them at Jahaz, they were victorious and marched north then turned south and eliminated the enemy in a full circle back down to Jahaz area where it had begun.

BIBLE HISTORY AFTERMATH of the Battle of Jahaz 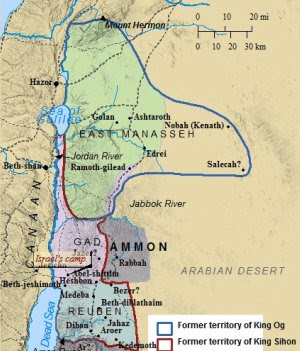 The land conquered here was assigned to the Tribe of Reuben by Moses. Later it would be taken over by the Tribe of Gad.

For such a tenacious enemy to be defeated by the Israelites would put fear and terror into all nations. This was God’s use of this battle. In many wars we have seen the value of propaganda and psychological warfare to confuse the enemy. In God’s war this was no exception.

SPIRITUAL WARFARE in the Battle of Jahaz

The significance of defeating the Amorites was very deep. Abraham may have been initially of Amorite origin. God told Abraham to leave his roots and establish a new covenant in Canaan. Now, 500 years later, Israel was establishing a new life in the promised land of Canaan. To go back to the land of the Amorites was worse than returning to Egypt. It was to return to the dead world of the past. The world from which God had raised Abraham and, consequently, all subsequent God fearing people.

Had Sihon’s army not gone against the Hebrews it would have been spared. God was faithful in protecting His people even though this was not His initial perfect plan.

Deuteronomy 32:27-31: [27] Were it not that I feared the wrath of the enemy, lest their adversaries should behave themselves strangely, and lest they should say, Our hand is high, and the Lord hath not done all this. [28] For they are a nation void of counsel, neither is there any understanding in them. [29] O that they were wise, that they understood this, that they would consider their latter end! [30] How should one chase a thousand, and two put ten thousand to flight, except their Rock had sold them, and the Lord had shut them up? [31] For their rock is not as our Rock, even our enemies themselves being judges.

Victory is assured when:

(a)The people believe in it.

(d)Affirm to be under His protection.

The protection, the “Rock” (with capital “R”) is none other than Jesus.

WORLD HISTORY TIMELINE at the Battle of Jahaz