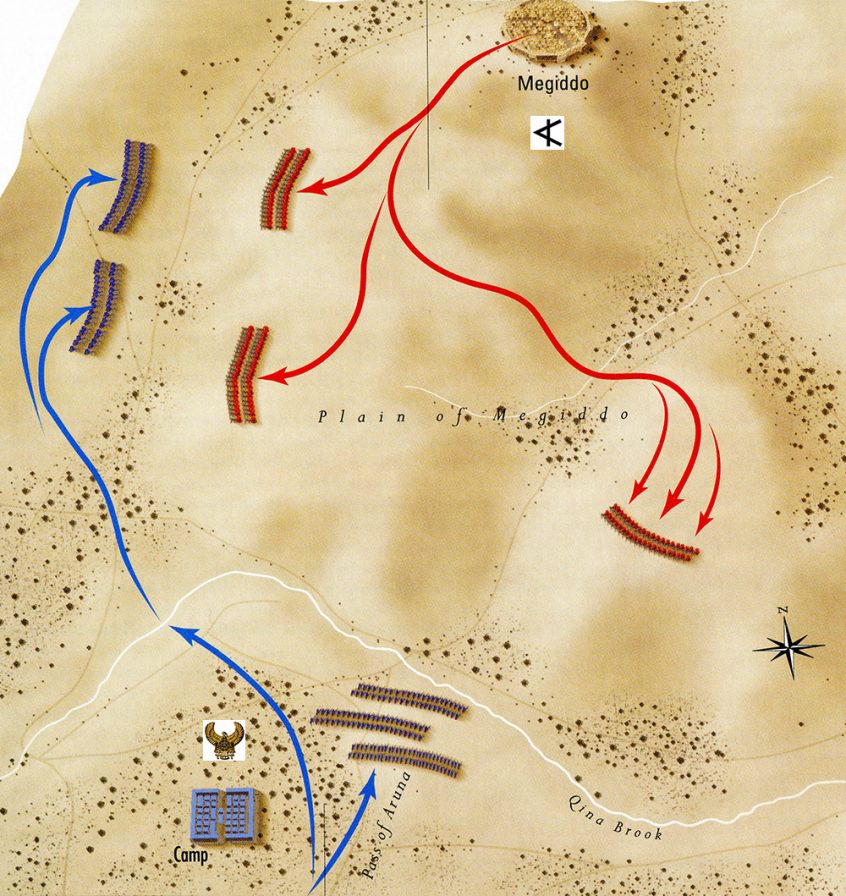 Pharaoh Thutmose III launched several expansionist campaigns into Canaan. At Megiddo, Egypt went against a coalition of Canaanite forces and won. Nevertheless, the Canaanites were able to resist for a long time before the fortress finally fell. Megiddo is not a biblical battle, but it is the first adequately recorded battle in history, so we have included it here.

Imperial aggression by Egypt was the cause of the battle of Megiddo.

Thutmose III, often viewed as the Napoleon of Ancient Egypt, led a series of campaigns into Canaan for the 17 years. The expeditions were done probably as a preemptive attack against border powers before they could invade Egypt. The Hyksos had invaded centuries earlier. Another reason was for the Pharaoh to demonstrate his ability to the domestic characters as a deterrent to rebellion.

Another reason we include this battle here is that later in Scripture, we will indeed see other conflicts in this same location. We sometimes use historical accounts of non-biblical battles to illustrate our battles in the Bible. Megiddo serves as a demonstration of how the Egyptian army operated, and this gives us insight on how they would have acted at the time of the Exodus. Lastly, Megiddo also has the singular distinction of being the same place as Armageddon.

A coalition of renegade princes who no longer wanted to be Egypt’s vassals sparked this conflict.  Around 300 Asian lords assembled in Palestine under the chief of Megiddo (which was never named). This force had the support (secret or public) of the kingdom of Mitanni.

In April 1961, Cuban exiles landed on the Bay of Pigs I. Order to advance inland, gain supporters and re-take their homeland from the dictator Fidel Castro. This small group of rebels was, in fact, secretly supported by the United States against Cuba and its more significant ally, the Soviet Union.

The Canaanites made camp at Megiddo and waited for the Egyptians. Both sides sought the battle.

On Egypt’s side, Thutmose may have used the rebellion of the Canaanites as a pretext to continue to expand his empire after defeating them. The Pharaoh planned the campaign to take Canaan long before, and the Canaanite rebellion was simply the pretext. The Pharaoh was bellicose and went to war immediately after taking power.

Evidence shows that since the Old Kingdom (late 2nd Millenium BC) the Egyptian army was composed of multi-ethnic units. These included dark Nubians, from Cush in the South (today’s Sudan) and later lighter-skinned Canaanites form the North.

There is much evidence for a complex military organization with a large officer corps. The army was divided into infantry and chariots as far back as 1500BC. Infantry was organized into contingents of 50. These were grouped into companies of 250, which were grouped into four divisions of 5000 each and named after a god: Amun, Ra, Aten and Seth. A fully mobilized army was thus able to field 20,000 troops.

In Egyptian accounts depict the Pharaoh at the centre of the action under the standard of the god Amun-Ra. The report may be for propagandistic reasons just as the exaggeration of numbers – millions and hundreds of thousands – also suggests.

There were three approaches to the city. One, the most direct, was the Pass of Aruna, to the south. The Asiatics were deployed there, south of the Qina Brook, protecting the city by blocking the road. They were also stationed around Megiddo to the west.

Thutmose’s generals advised avoidance of central assault by taking a circuitous route. He ignores them and takes the direct and narrow path, which was only 30 feet wide; this maneuver was, apparently, for political reasons. Thutmose wanted to save face. So tight was this route that when the Egyptian advanced spearhead sighted the enemy, the remaining bulk force was, on the road, 9 miles behind. The complacency of the Chief of Megiddo gave the Egyptians time to deploy their units onto the plain and set up camp.

The generals asked that the Pharaoh waited for the arrival of the remaining force before confronting the enemy. He heeded, ordering the attack for the next day.

The Pharaoh was at the centre of the battle line in his chariot with northern and southern attack formations on his flanks.

There is mention of many Asiatic chariots, but the Egyptians may have been constituted mainly by infantry despite accounts of there being horses in the rear formations.

The Asiatic choice of deployment – south and outside the city to the west – may have dictated their loss of tactical command on the field. They could not attack the Egyptians in confidence but instead waited for their attack. It was either that or their overconfidence, which led to their inaction.

One of the clever ploys that the Asiatics used to counter the initial Egyptian chariot advance was to release a mare in heat to disorient their horses.  The mare was killed before this could happen.

The Asiatic lines broke – most likely after minimal fighting – and fled towards the city, abandoning the chariots, in fear once confronted with his majesty Thutmose.

The Asiatic losses are shallow for an army that has lost. The Egyptians mention 83 Asiatics killed and 340 prisoners taken.

Egypt’s failure to loot the enemy camp during the battle resulted in an inconclusive battle that day. The fortress of Megiddo was under siege for seven months before collapsing.

The battle of Megiddo is a classic example of an objective attained with the use of threat of a fight rather than engaging in action. Von Clausewitz On War well describes this concept. Megiddo opened up a whole new expansion to the East for the Egyptians. It marked the beginning of Egypt’s expansionist period, which would climax two centuries later at the battle of Kadesh.

It also opened up the tradition of using foreign charioteers for the vast chariot armies. From that point on, Egypt was able to launch up to 5000 chariots in a campaign.

Perhaps the most significant result of the period during this conflict was the influx of large populations into Egypt, resulting in massive slavery.

[1] Chronology for Ancient Egypt is widely disputed. We follow the New Chronology.