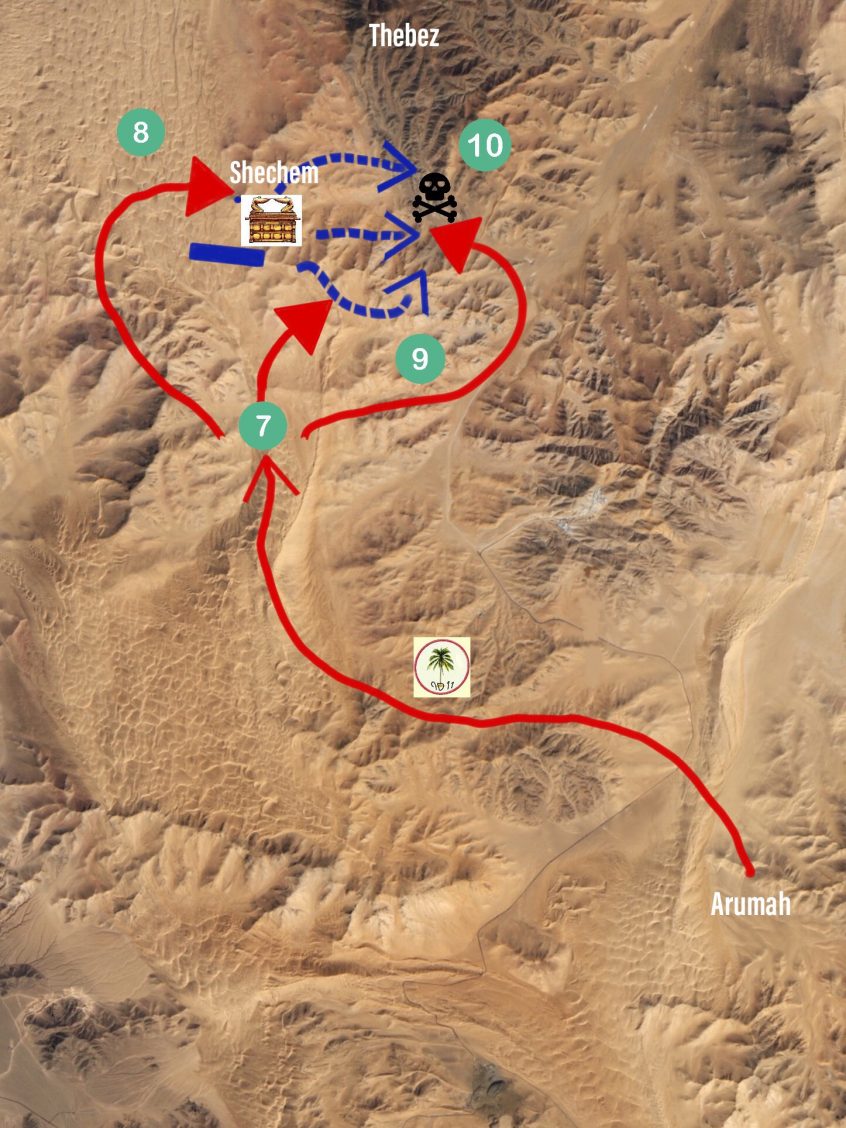 Judges 9 is an interlude from the regular flow of the Book of Judges during the full occupation of Canaan by the Israelites. Gideon’s decline to take up kingship created a vacuum exploited by Abimelech who, ambitious and bloodthirsty, led one of the first coup-D’etas depicted in the Bible. His ascension was only possible because of the greed and depravity Israel had fallen into. The leaders of Shechem were corrupt and supported Abimelech and his murder of his seventy brothers to consolidate power. Abimelech’s plan boomeranged as surviving Jotham struck back, supported by the citizens, he was able to sway to his righteous cause.

Despite Gideon’s victory, his small compromise with sin led Israel back into depravity and Baal worship. Abimelech, a son of Gideon (family of Jerub-Baal) with a Shechemite concubine, was a treacherous product of that era. Abimelech approached his relatives and appealed to their blood ties. The elders of Shechem[1] agreed to take him as King of Shechem.

In his quest for seizing power, Abimelech set out to murder all of his brothers. Abimelech paid violent men with pagan money from Baal-Berith and led them to murder his seventy brothers. Only one, the youngest, named Jothan, escaped and hid.

This horrendous episode is certainly not the first where brother turns against brother; we will remember Cain and Abel and Joseph’s brothers. This story is, however, the first recorded instance where an Israelite ruler imposes hereditary rule.

Jothan went to Mout Gerizim and stirred up the people against Abimelech, using the memory of his father Gideon and his deliverance of Shechem from Midian as inspiration. Jothan did not expect loyalty to himself; he merely planted discord and fled to hide from Abimelech’s wrath.

[1] At this point in history, Shechem was, like Hazor and Gezer, a principal city; more-so than Jerusalem.

Abimelech became a judge over Israel and ruled for three years with the help of the city’s governor, Zebul, as his lackey. Abimelech eventually reaped what he sowed when Gaal, son of Ebed, stirred up rebellion. As soon as Gaal questioned Abimelech’s legitimacy to rule, Abimelech’s cause fell flat.

The Shechemites became drunk during a pagan celebration and turned against Abimelech, just as Jothan had intended. Gaal planned to ambush Abimelech in an open field.

Governor Zebul, however, remained loyal to Abimelech and kept him up to date with the developments. On Zebul’s advice, Abimelech gathered an army to attack Shechem.

The Israelites had become more proficient in siege warfare by this period. Abimelech was no doubt a student of Joshua. Both commanders used fire against wooden structures at the Battle of Ai, namely gates, as well as to force defenders out of their fortifications.

The Canaanites iron chariots, although bigger and heavier than Egyptian chariots, moved faster because of their design.The Canaanite soldier’s khopesh was a revolutionary sword with a hook at the end to tripped the enemy. On top of that, they were well protected with bronze belts spears and daggers.

Their tactic was to spearhead the strike force with chariots followed by infantry columns.

4. Gaal had the support of Shechem’s leaders, but his attack on Abimelech failed and the enemy chased him back to the city gate.

5. Abimelech set up his field headquarters at Arumah [2]

6. Gaal’s forces remained out in the open defending the area of the city gate.

7. The following day Gaal’s position in the fields was reported to Abimelech, who divided his army into three companies and attacked.

8. One company gained control of the city gate area.

9. The other two companies chased and destroyed the enemy that was dispersed and unprotected.

10. With the main Gaal force defeated, Abimelech was able to demolish Shechem. The Israelites massacred the inhabitants and salted the ground. [3].

[3] Salt would be scattered on a portion of ground – captured from an enemy or cursed – so that nothing else could grow there. Authorities kept this practice for thousands of years until the Middle Ages.

11. A group of about one thousand citizens from Shechem had survived by hiding in the temple of Baal-berith. They then gathered in a fortified tower. Abimelech eliminated this last pocket of resistance by lighting up bundles of wood and setting the entrenchment ablaze and killing these last defenders.

12. Assured of his invincibility, Abimelech continued to Thebez [5]. He captured most of the city but a structure named “Tower-of-Strength” which stood in the middle. Again this is where the last resistance gathered.

13. Abimelech attacked and was preparing to set the structure on fire as he haddone in the previous battle. This time, however, a woman at the top dropped amillstone on his head.

As he lay mortally wounded Abimelech commandedhis armour bearer to run him through with a sword so that he would not have the dishonour of dying at the hand of a woman. Abimelech’s 70 brothers were avenged.

As was often the case in antiquity, the people won the battle by slaying the enemy leader on the battlefield. The battle was lost when the leader fell. The defeat was irrespective of the casualties; the cause and justification for the fight vanished.

By the time the rebels eventually won, a significant number of the people had died, and two of their cities were laid to waste.[6]

Although the Bible categorizes Abimelech as a Judgeof Israel, he was, for all intents, a kingtype ruler. He was king of Shechem and wouldhave gone on tobe king over Israel if he had a chance. This brief experience foreshadowed Israel’s royal period later, particularly as it became twisted and depraved by some of its kings.

[6] A victory that inflicts such a devastating toll on the victor that it is tantamount to defeat is known as a Pyrrhic victory. Someone who wins a Pyrrhic victory has been victorious in some way. However, the heavy toll negates any sense of achievement or profit. (Wikipedia).

The foundation for this depraved and twisted history was laid when Gideon began straying from God’s perfect plan for him. Gideon had acquired concubines, one of which was from Shechem. Gideon’s lifestyle went against God’s plan. The Law stated that each man should have one wife and God had specifically oreder His people not intermarry with the locals.

Thus Abimelech was born to Gideon and his concubine from Shechem. The curse fell upon the people of Shechem for having followed Baal. They got an evil judge, Abimelech, over them.

Unfortunately, Gaal’s initial revolt did not work. Right or wrong, Abimelech was the ruler of the land. God does not condone revolts. Gaal may have failed himself, but God’s justice was served in the end.

NOT CALLED BY GOD

Abimelechwas the first de facto king over Israel, however unofficially.Is motivation was not godly but lust for power.

Today many pastors are in front of a church that God never appointedthem to.God births a church in the realm of the spirit. Nobody has a right to start a church on their own.The majority of churches do not have an anointing on them, and those spiritually hungry congregation members feel this.

The same way, once Gaal spoke truth, the people of Shechem recognized it and turned against the rogue king Abimelech.

PRIDE AFTER THE FALL

Even at the moment of their deliverance, God did not give them a military victory as before. Instead, Abimelech, the head of the enemy forces, died in a most unmilitary and almost comical way: a civilian woman dropped a rock on his head. He then uses his last breath to beg for a battle-worthy death rather than let it be known that he met his demise at a woman’s hand. We can point out a few conclusions here:

On both occasions, in Schechem and at Thebez, the people under attack held out in fortifications.

While at Shechem the defenders were destroyed, at Thebez they eventually won the fight. It did not require much fighting. After all, in the end, it was a simple woman that helped defeat the enemy. What the people did do was resist. They held fast.

Hebrews 10:22-25 [22] Let us draw near with a true heart in full assurance of faith, having our hearts sprinkled from an evil conscience, and our bodies washed with pure water. [23] Let us hold fast the profession of our faith without wavering; (for he is faithful that promised;) [24] And let us consider one another to provoke unto love and to good works: [25] Not forsaking the assembling of ourselves together, as the manner of some is ; but exhorting one another : and so much the more, as ye see the day approaching.

Psalm 61:2-3 From the end of the earth will I cry unto thee, when my heart is overwhelmed: lead me to the rock that is higher than I. For thou hast been a shelter for me, and a strong tower from the enemy.

Abimelech had killed his brothers with one stone, and he died by one stone himself.

Matthew 7:2 NKJV For with what judgment you judge, you will be judged; and with the measure you use, it will be measured back to you.

This world history timeline shows ancient calendars dates prior to 664 BC based on Rohl’s New Chronology. Why we chose this timeline? See summarized explanation in the Chronological Discrepancies chapter.