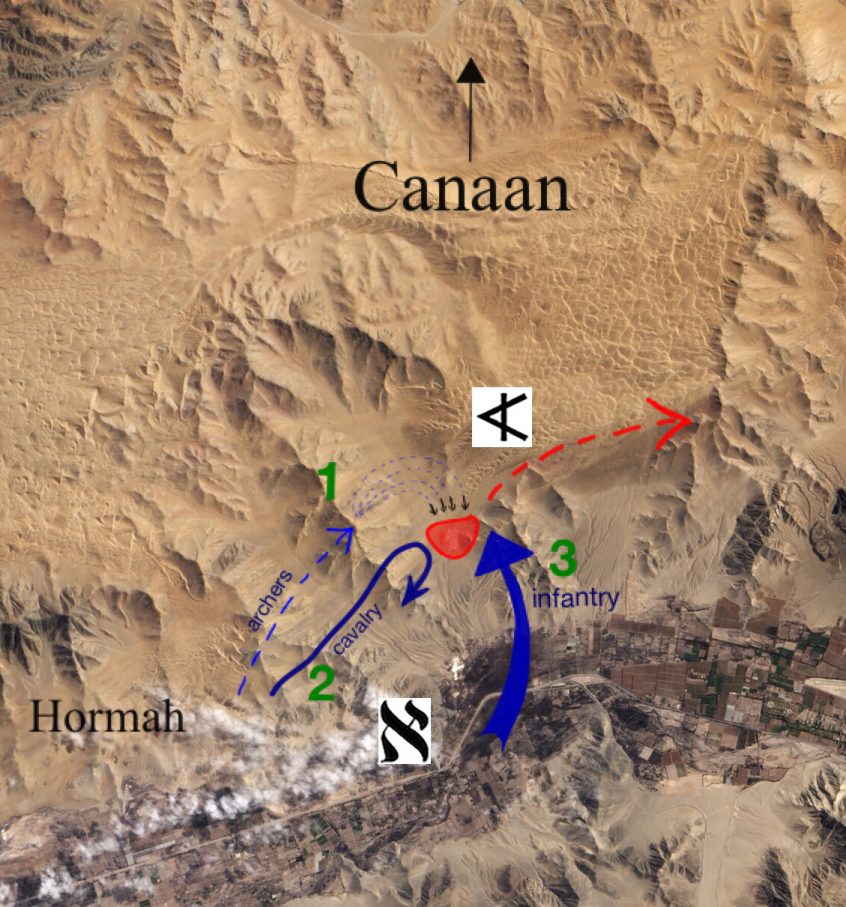 This second battle of Hormah is mostly unrelated with the first given the time that had elapsed in the wilderness – 40 years. It was fought with different people for a different reason. Nevertheless it is a vindication of the first defeat. 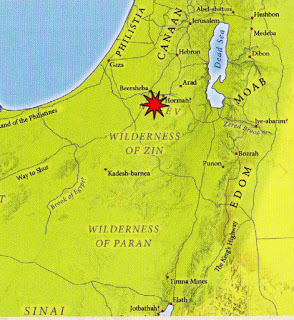 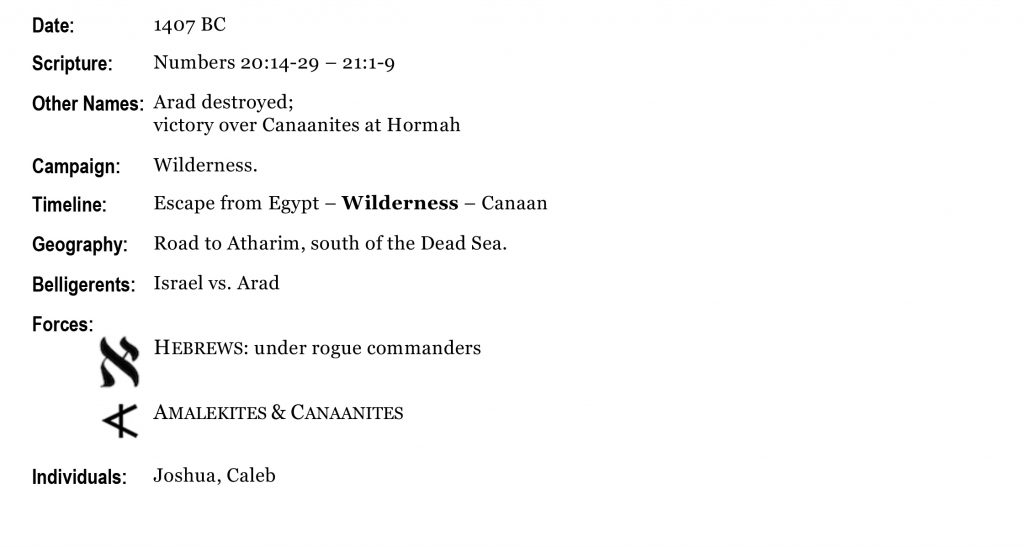 ANCIENT HISTORY before the Victory at Hormah

1407 BC is a very busy period for war, ripe with conflict. We cover 9 major battles in this single year alone!
The wandering in the desert was at an end. The whole cursed generation was now dead except for the leaders and among them only Caleb and Joshua had faithfully stood on God’s promises and, consequently, the remained the only ones destined to enter the promised land. Moses too was barred from the promise because of his disobedience at the waters of Meribah.

CONFLICT BACKGROUND leading to the Victory at Hormah

The time in the wilderness after the defeat at the First Battle of Hormah 40 years earlier left the Hebrew delivered from destruction but downcast low morale and their reservoirs of faith depleted.

As the time in the wilderness drew to a close it was time for formulating a new strategy and a new route of advance. The New generation of Hebrews (still led by Moses) planned now to go around the Canaanite defences instead of through them. Instead of advancing northward the plan called them to March west and around the Dead Sea and then North.

Plan “A” 40 years earlier was the original strategy devised by God calling for a breakthrough northward. Had they followed it, the people would have succeeded. Now, after the wilderness wait.
Plan “B” was carried out but, as this was a worldly plan (and not godly) it had opposition straight away. 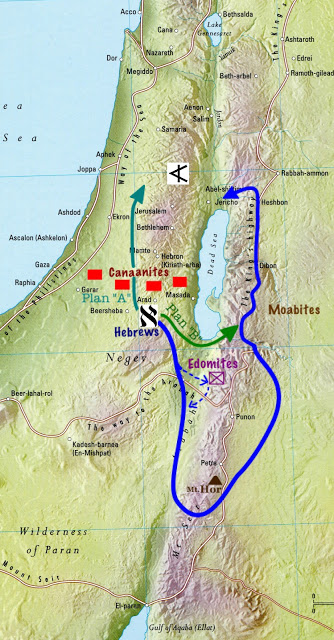 The new route called for passage through the land of Edom. The people only planed to go through the land, not take it, but the King of Edom refused them. With the threat of a large powerful army in their path the people retreated. This army was still not as large as the Egyptian army which pursued them at the Red Sea crossing and the people were by now clearly organized and trained by Joshua into an effective fighting force, but the years of suffering caused by their parents’ unbelief had drained the courage out of them. So they left he Edomites unchallenged.

The big detour from the original had an even bigger detour. The Hebrews now went much further south along the frontier of Edom. Aaron died along the way and was buried at Mount Hor.

MILITARY HISTORY of the Victory at Hormah

King Arad of Canaan, ruler of the Negev, no doubt confident in the fact that the Hebrews had recently shied away from fighting the Edomites decided to attack. He first met with success and took prisoners.

The Hebrews promised God they would destroy the enemy cities if He would deliver them. God listened and the Israelites overran all the Canaanites settlements in their path. The fight must have been consistent with the usual tactic conditioned by the available weapons: 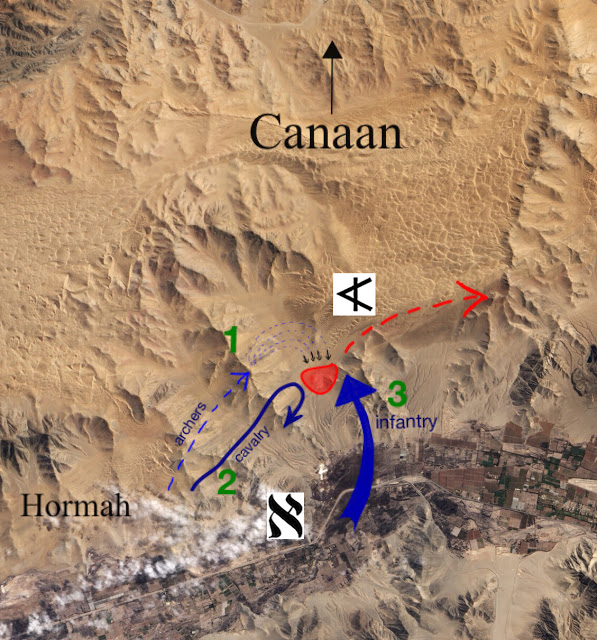 The Hebrews so utterly levelled the land that it took the name “Hormah” (Hebrew: “holy destruction”). The people made sure God retained the credit for this victory. This was of course the same place to which the Hebrews had been beaten back 40 years earlier when they had charged up the hill irresponsibly.

BIBLE HISTORY AFTERMATH of the Victory at Hormah

This was the most successful battle during the Israelite march through the wilderness to date. The crossing of the Red Sea had been a victorious escape from the enemy and Rephidim had been a victorious repelling of the enemy. The second battle of Hormah was more than that it was the first complete destruction of the forces in front of the Hebrews. It created a reputation that would cause terror in the
enemy ahead of them from then on.

Victorious as this was it was not the best scenario, for it was not God’s perfect will. The original plan of God (“Plan A”) was for them to go from the wilderness of Paran straight north. However after the rebellion resulting from the people’s pessimistic take on the report of the 12 spies and the doubting even after the second battle of Hormah when they were victorious, they still went east and north around the Dead Sea that became the new plan but not as good because it was a huge detour to the land of milk and honey. It was a barren land and even after crossing the Jordan their route gave their enemies in Canaan a lot of time to prepare for them and resist them in the Hills rather than a surprise blitzkrieg from north of Arad towards the plains of Gaza and north and beyond in fact didn’t tire campaigns of Joshua were because of this poor man problem of the 12 spies many died unnecessarily.

Since the rest of the people did not have faith in victory then God met them where they were at by telling them to bypass the enemy rather than confront him. The people would have to be content with second best.

Although God allowed this secondary strategy, it would have the greatest repercussion for the people which we will address later.

Incredibly, despite knowing the cause of the demise of the previous generation and despite God delivering Arad into their hands, the people grumbled again about their condition in the wilderness. Perhaps they thought they were entitled to the spoils of victory after the battle. We are not certain of the time elapsed. Perhaps the riches of Arad were gained and used and the people were now back to rags. What is important is that God was grieved again and this time He allowed them to be consumed by venomous snakes but, in His mercy, he provided an antidote: a bronze snake was made and put on a pole for healing all who looked upon it.

John 3:13-15: [13] And no man hath ascended up to heaven, but he that came down from heaven, even the Son of man which is in heaven. [14] And as Moses lifted up the serpent in the wilderness, even so must the Son of man be lifted up. [15] That whosoever believeth in him should not perish, but have eternal life.

SPIRITUAL WARFARE in the Victory at Hormah

The SINS of the FATHERS

When they came up against the Edomites the Hebrews buckled and turned back. Had they stuck with God earlier they would have simply fought and pushed this army aside like they had done with the Amalekites at Rephidim. However, when their faith went so did their confidence in battle. The fighters themselves understood that as they did not trust God with what He told them about the land, they knew their faith had left them with regards to them overpowering their enemies.

Sometimes the results of sin continue even years after. The Hebrews had stayed in the desert for nearly four decades, and the generation that had caused this were now gone (save for Moses, Joshua and Caleb). Nevertheless the effects were still there. It is clear that although this was a new generation, the fright and weakness of the previous generation that passed away in the wilderness had transferred onto the new. It is easy to understand, for instance, that parents that are always gloomy and downcast will produce children that have the same traits. The sin of fear, doubt and revolt that grieved God 40 years earlier had affected the children (and perhaps even descendants) of the people responsible. This is why they didn’t have the courage to fight against the Edomites when they began their march.

The first battle of Hormah had been one generation earlier. At that time the people had lost because they had initially been afraid to take something God had already given them. This was 40 years later and a new breed of fighters. Before the battle against the King of Arad they pleaded that God would give them victory.

There is no expiry date on the promises of God. When He says something is ours we do not have to ask for it. We can declare it to strengthen our morale and quicken our faith but not to remind God.

Upon Moses’ intercessory prayer, God instructed a bronze snake to be put on a pole for healing all who looked upon it.

The bronze snake might have been put on a pole with a beam – a cross (how else do you put a snake on a pole?). That those who look upon it are healed (of their infirmity and sin). 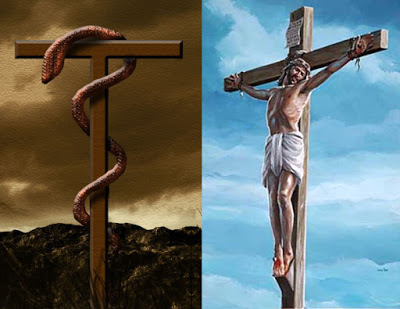 This calamity again led Moses to intercede for the people in prayer as he had done earlier, after the rebellion following the spies’ return from the first mission into Canaan (Numbers 14:17-19). 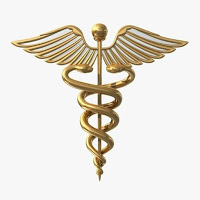 The origin of the universal medical symbol today

BIBLE BATTLE on LOCATION around the Victory at Hormah 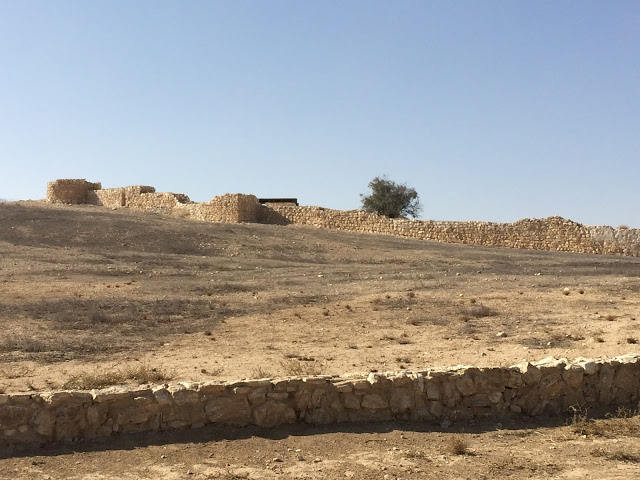 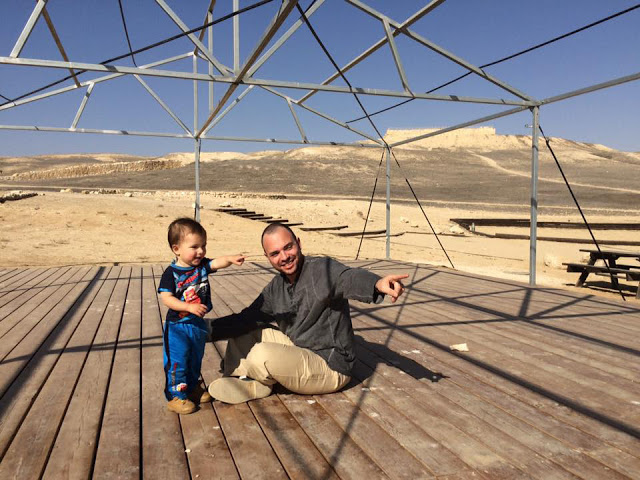 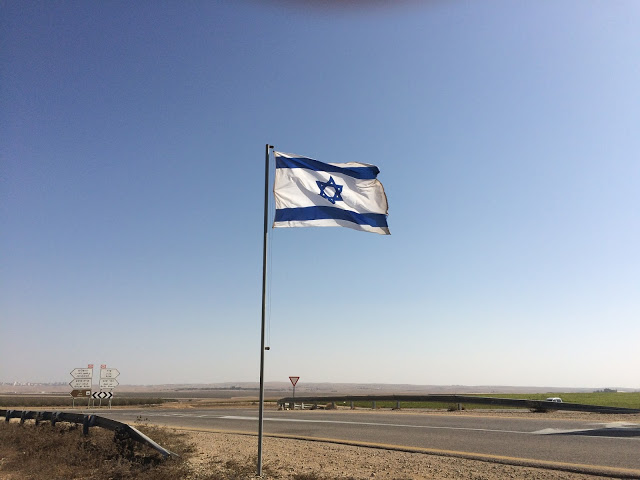 WORLD HISTORY TIMELINE at the Victory at Hormah