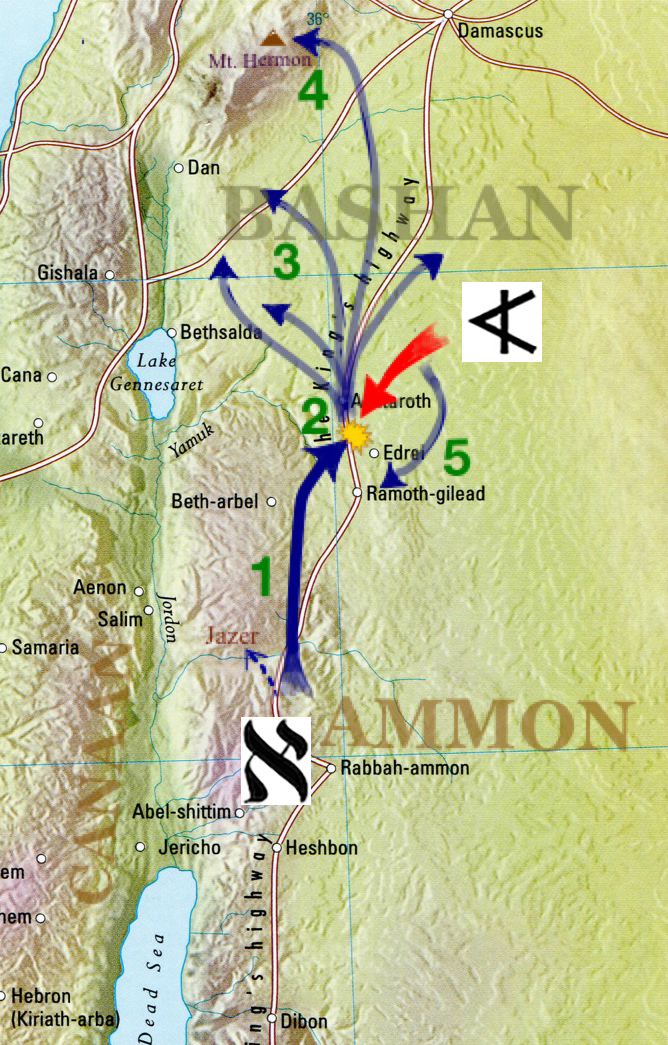 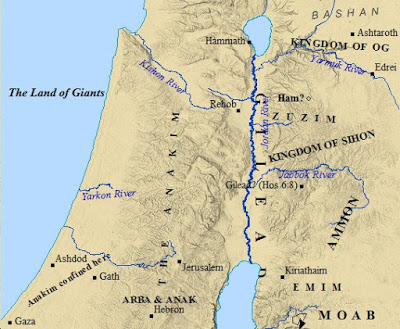 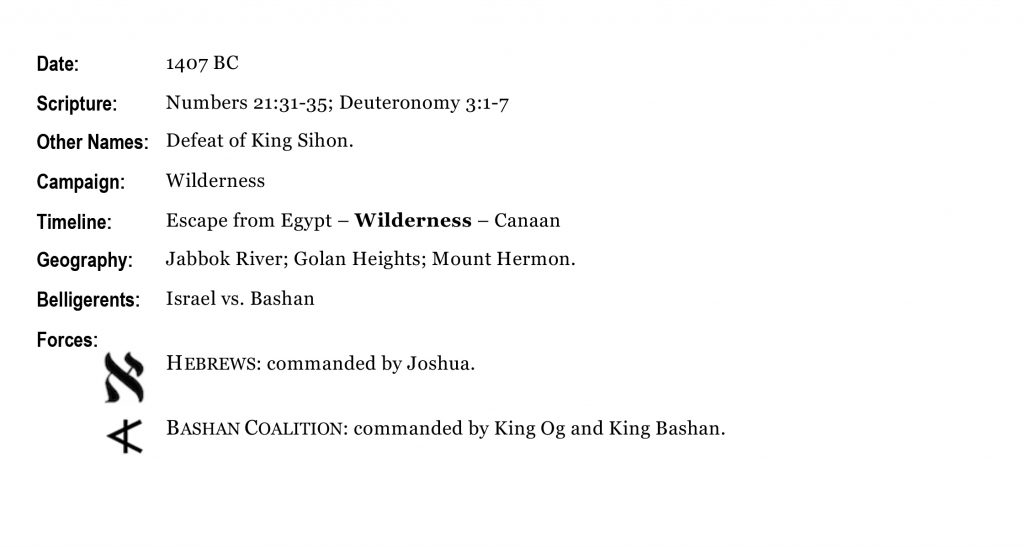 ANCIENT HISTORY before the Battle of Edrei

After consolidating their position to the south of the Ammonite frontier and moping up opposition there, Israel regrouped and prepared to continue their advance. Spies were sent to Jazer and the area was cleared of Amorites. It is a sound strategy that Joshua would not want to leave a threat behind him when the time came to cross the Jordan into Canaan.

GIANTS in the BIBLE

What the reconnaissance found was another land of giants, as the previous generation had done originally when they came out of the Negev 40 years earlier. Giants originated shortly after the fall of man (Genesis
6). With the increase of population, women began procreating with Nephilim.

TYPES of GIANTS in the BIBLE

Nephilim: Sons of Anak in Canaan before the procreation between man and other giants.

Anakim: (“long necked”): descendants of the race of Arba, which was made up of three tribes of Sheshai, Ahiman and Talmai, (Joshua 15:13; 21:11). They dwelled in south Canaan concentrating Hebron and were the giants that scared the first Hebrew spies into the land (Numbers 13). Caleb eventually took over Hebron in the southern Canaan campaign and vanished.

Emim: warriors who lived east of the Jordan at the time of Abraham and were moved out by the Moabites.

Zamzummim: a race, large in number, possibly synonym of the Emim and Zuzim. They were confronted by Chedorlaomer at the time of Abraham and wiped out by the Ammonites.

Amorites: distinguished from the Canaanites who occupied the lower plains, the Amorites occupied the hill country of Canaan until Joshua’s invasion. They also lived in the barren highland west of the Dead Sea (today’s Engedi). They later migrated to Hebron and to the pastures south of the Jabbok, east of the Dead Sea under King Sihon, Gilead and Bashan. 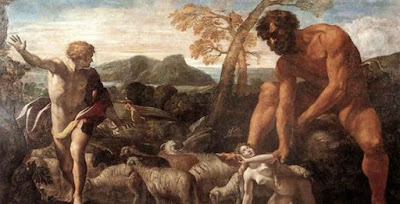 Rephaim: describes all giant races in Canaan. Rephaim themselves lived beyond the Jordan during Abraham at Ashtaroth Karnaim, in the time of Abraham. During the Wilderness campaign King Og, of Bashan was a Rephaim. They survived in Gath until David’s reign. Goliath was a descendant of either Rephaim or the kindred tribe of Anakim. Rephaim were particularly violent and criminal, gangsters of antiquity.

Later mythologies, particularly Greek, are peppered with giants and monsters.

Myth always has an element of truth, however small. The Greek inventions were an exaggeration but they had a possible foundation on the reports of giants we find in Scripture. Notice, for instance, how similar the Minotaur is to Baal. One aspect in which mythology corresponds is that their monsters invariably represent evil.

If you don’t believe it check the story of Robert Wadlow, the tallest American, born in 1918. 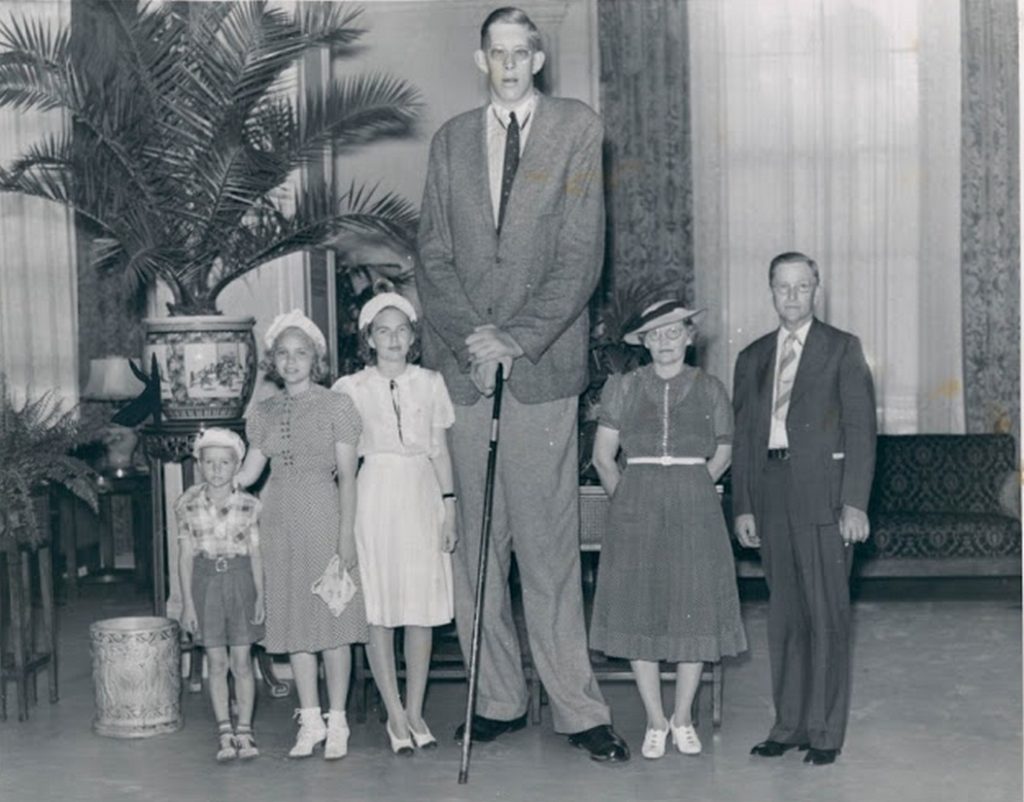 Abraham also had a run-in with Giants (Genesis 23): the children of Heth 2. The name “Heth” is a synonym of “terror” and a representative of the Devil. These were giants who had nevertheless instantly recognized the blessing that was upon Abraham and views him as Elohim, which is to say, a “ little god”, prince of heaven and a deity among them.
This legacy left to them by their patriarch, along with the recent military exploits, should have been enough to send the giant enemies ahead of them to scatter but they did not. Jericho’s defenders were up for a fight.

CONFLICT BACKGROUND leading to the Battle of Edrei

By this time word had spread of the Hebrew victories in the last months and so King Og of Bashan decided to carry out a pre-emptive strike. In a way this was militarily sound because when you attack the enemy you usually have the tactical advantage. However, based on his neighbours recent defeats at the hands of Israel and, especially, on the fact that the Hebrews had no wish to quarrel with any people outside of Canaan (unless they were bellicose towards them), Og might have been wiser to leave them alone.

God spoke to Joshua assuring him that the victory was theirs.

MILITARY HISTORY of the Battle of Edrei

The Hebrews struck down Og, his sons and his whole army taking possession of his land. 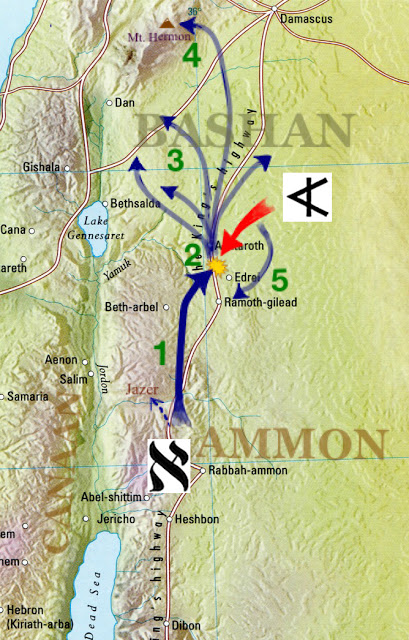 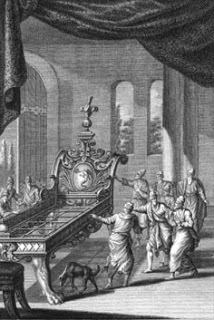 BIBLE HISTORY AFTERMATH of the Battle of Edrei

After the two decisive battles of Jahaz and Edrei, which happened almost on top of each other, Moses would give the land east of Jordan to Gadites, Reubenites and Makirites for their commitment in fighting for Canaan alongside the Israelites.

God commanded the people not into greedy conquest, as they were not allowed to settle in the territory they had defeated until they crossed into the promised land. The objective was to eliminate opposition to their path into the land.

Like when He sent manna, God provides, at times, just what we need and not more. When that happens there is a purpose. He did not want His people to take over land that was not assigned to them. It was another test of faith to relinquish the territory that had been gained through victory now in exchange for unknown territory that the Hebrews had not even stepped into yet.

Today the State of Israel has control of territories that were initially not part of the borders assigned to it by the United Nations in 1948. One of these is the Golan Heights which Israel annexed from Syria in 1967. This was never part of the country’s plan nor did Israel ever have expansionist designs for the surrounding nations but the fact is that Syria attacked them repeatedly in different wars. Finally, Israel holds the Golan as a buffer to protect its actual sovereign land from further attack. Israel would relinquish the Golan but only when Syria would no longer pose any threat.

Golan Heights viewed from Ramot Naftali, Hula Valey in
between, North of Galilee

SPIRITUAL WARFARE in the Battle of Edrei

Spies were sent out to Jazer. It was now common practice for spies to be sent out. While this is sound military strategy – to reconnoiter the land before committing major troops – we also remember that the Hebrews got themselves into this less than perfect scenario of the invasion of Canaan because that had initially send out spies when God did not want them to (Numbers 14). After the wilderness wait they were now having to send out spies constantly throughout their grinding advance around the eastern Dead Sea. 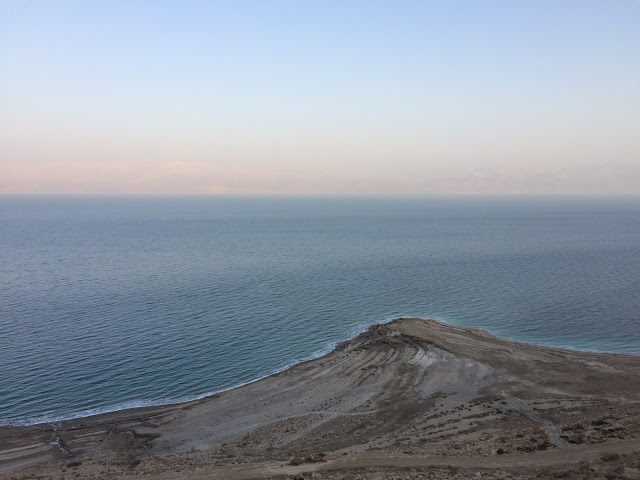 God told Joshua that he already had delivered Og’s army to the hands of Israel. This was past tense; it had been accomplished. When God declares something it is as good as done and because Joshua brought his faith and mixed it with that it came to pass in the natural.

Even in the natural realm General Sun Tzu understood this: “every battle is won or lost before it’s ever fought.”

Before Jesus died he said “it is finished” (John 19:30). This was before he gave up his spirit for us and before he went down to Hell and up to Heaven to deliver us. Yet he spoke as if it had been accomplished, which it was.

Giants came from an unholy union of human women and fallen angels. That does not happen today but we do see an unholy worship of giants in the form of today’s superhero movies. Mankind yearns for the powerful supernatural. 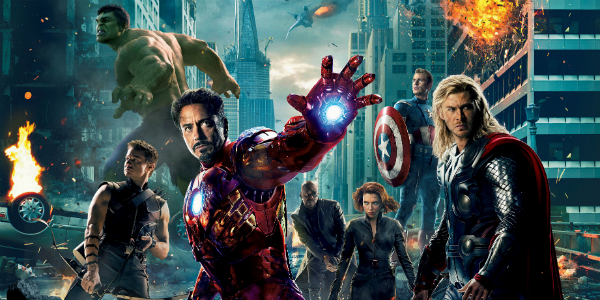 The problem with this is that they are looking in the wrong place. They allow only superheroes to have power to combat these foes in their imaginary worlds while ignoring that (a) the supernatural forces of evil are very real and (b) those who believe in Jesus and have been baptized by the Holy Spirit are more than enough to deal with them.

It is time we believe this and harness unto the real power of the universe for “there is nothing more powerful on earth than redeemed man. 3

THE ROLE of the BELIEVER

Like Joshua, our role as believers is to pray the prayer of faith and follow its
course.
Mark 11:23-24: [23] For verily I say unto you, That whosoever shall say unto this mountain, Be thou removed, and be thou cast into the sea; and shall not doubt in his heart, but shall believe that those things which he saith shall come to pass; he shall have whatsoever he saith. [24] Therefore I say unto you, What things soever ye desire, when ye pray, believe that ye receive them, and ye shall have them.
When you are a believer, “God allows what you allow.”4
Matthew 16:19 AMP: I will give you the keys of the kingdom of heaven; and whatever you bind (declare to be improper and unlawful) on earth must be what is already bound in heaven; and whatever you loose (declare lawful) on earth must be what is already loosed in heaven.
Joshua’s victory had already been established in Heaven. Og and his whole army had been delivered to Israel. All Joshua now did when he brought his faith was to receive this, to have it manifest in the natural.

Israel’s adversaries knew to go after their gods for support. This was normal back then. It is with the passage of time that mankind has become more desensitized to the spiritual and look only to their own alleged power. It is however clear, in antiquity, that there is no independence from the spiritual spheres of influence. One either has God on his side or the Devil, in this case through counterfeit gods.

This is what happened when the people went back south into Moab and there they indulged in sexual sin with their women. This put them under the authority of Baal for which a plague came upon them killing 24,000. God did not create the plague but when the people sinned they exchanged the protection of the Father for the evil of the local principality.

BIBLE BATTLE on LOCATION around the Battle of Edrei

Golan
heights plains, where much of the advance into the Kingdom of Bashan took place 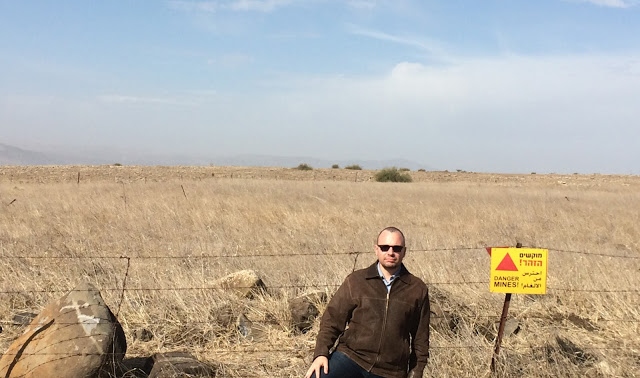 WORLD HISTORY TIMELINE at the Battle of Edrei

Destruction of MIDIAN | Numbers 31; Balaam's donkey; Vengeance on the Midianites and Moabites
Battle of JAHAZ - Defeat of the Amorites - King Sihon