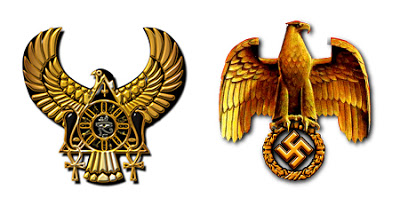 Antisemitism was demonically inspired not only because it’s obvious evil but especially satanic because God had a plan for the Jewish people which the Devil, tried to thwart. Both God and Satan have fought this oldest of wars throughout the entire history of humanity. That has not changed and it explains why certain historical events end up being similar.

Ironically “If history did not to repeat itself then a lot of students of history would be bored and would stop studying.”1

The Pharaoh represented the Ra, the Sun god and Horus, the hawk god, which battled the forces of chaos in the universe.

Nazi Germany had officials high up that were deeply into the occult. Their main symbol was the swastika, which also represented the sun, and the eagle (another bird of prey). Hitler’s mission was also to battle the forces of chaos which he saw in Bolshevism and Judaism.

Hebrews sought refuge in Egypt because of the famine.

Hebrews sought a new place to live in in Europe because of the diaspora.

Pharaoh invited them to come and settle. He put them under His protection (Genesis 45:17-18).

Jews came to Europe and settled in many countries such as Germany. Example: Casimir III invited Jews to come to Poland and “confirmed privileges and protections previously granted to Jews and encouraged them to settle in Poland in great numbers.”

Egyptians discriminated The Hebrews for being shepherds and looked down on them (Genesis 46:33-34).

In Europe Jews have always been a part of society but nevertheless discriminated against.

The Hebrews, through Joseph, became the holders of the country’s storehouse and means of production. The Egyptians exchanged their livestock for food that was in the hands of the Hebrews (Genesis 47:17-18).

In Europe Jews prospered in many areas but became identified with controlling the banking system. Karl Marx was of course the creator of the theory that workers should have the means of production in their own hands which became the foundation of  communism. (Das Kapital)

Egypt, centuries later, was a super power (peaking at the Battle of Kadesh) the new Pharaoh did not care about the good Joseph had done. As if the Hebrews had overstayed their welcome, Pharaoh decided not to expel them but to enslave them for his economic gain. The Egyptians were afraid that the Hebrews would rise up against them and take over.

In Europe, centuries later, Germany was a super power. Its new leader, Adolf Hitler and the Nazis convinced the people that the Jews were to blame for all wars and calamities and that they aimed to take over the governments of the continent. Hitler eradicated the Jew  from German society, deport him but later enslave millions in the vast system of work camps run by the SS.

Pharaoh used the periodic killing of the Hebrew first born as population control. After the plagues of Egypt and the exodus of the Hebrews Pharaoh decided to go after them with his armies and kill every last one. He no longer cared about getting the Hebrews back as slaves for his economy.

With the intensification of WWII, and particularly during its most destructive phase (1942-45) the extermination of the Jews became policy for the III Reich. An entire apparatus of death was put in motion reaching its peak at the time Germany was clearly no longer able to win the war. In fact, 1944 was the greatest year of production for Germany and was also the greatest year of extermination. They did not care to use the Jews as slave labour any longer.

Israel escaped from Egypt on the Seventh month, at which time God told them to establish a new calendar [The seventh month (Nisan) then becomes the first month.]

Mussolini restarted the calendar in 1922 when fascism (the basis for Hitler’s National Socialism) came into power. It became Year zero of the New Fascist Era. Satan imitates God’s plan it seems. God creates a new calendar through Moses to mark the time men were set free. Satan creates a new calendar through Mussolini to. Ark the time men were destined to be enslaved.

The Israelites left Egypt and later into the Promised Land. The northern part of Egypt was taken over by an Eastern power: the Hittites.

The Jews left Germany’s III Reich and returned to their Promised Land. The Eastern part of Germany was taken over by an Eastern power: the Soviets. 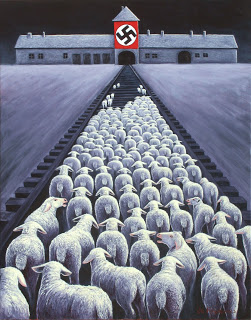 These near identical historic developments, in very different geographical places, at very different times in history, with very different cultures and carried out by very different leaders shows that no mater who the players are or the scenery, the war is still the same one: Satan against God.

There are differences between the two eras: diplomatic relations between countries, economic realities, means of communication, sizes of armies, duration of events, etc. However these differences do not stand in the way of making a clear parallel between both eras. The result is the same: the distortion of reality and persecution of the people that God has called His. The fact that the 20th Century is posterior to the new covenant through Jesus Christ and that even so called Christians have persecuted the Jews does not invalidate the fact that in both cases, Pharaoh and Hitler, this was against God. If it is against God then it can only be from Satan.

In all historical analysis we must clearly look at the results and judge the source of the events accordingly.

[next time: “Battle of Rephidim“]