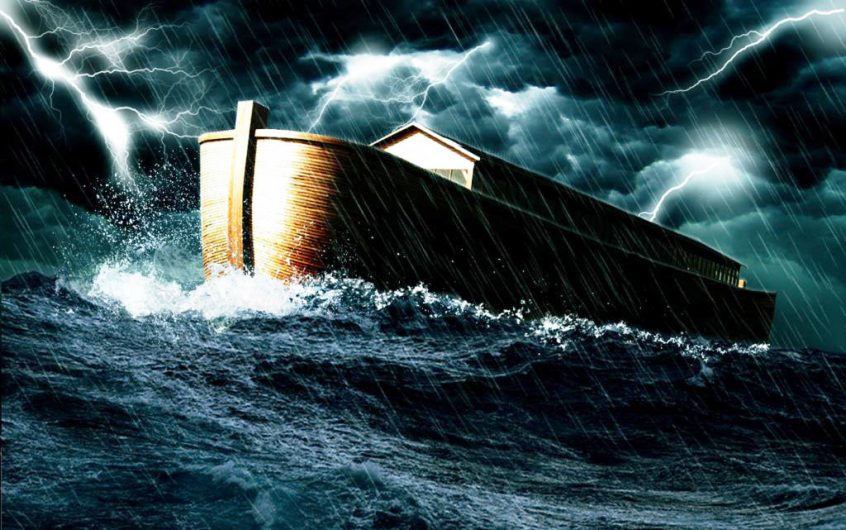 The first Bible battle proper does not appear until Abraham. It is important to briefly go through the beginning history of the World leading up to it. This will identify the initial forces in the natural (Geo-economic) and in the spirit (sin) that will initiate conflict in World history.

ADAM and EVE – the beginning history of the World and Bible 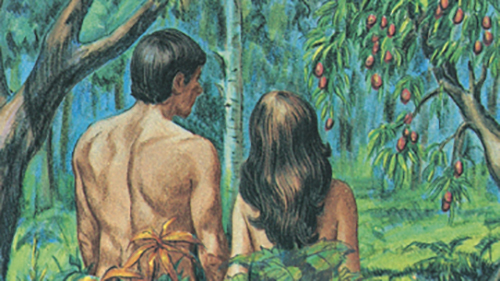 God created everything and saw that it was good. The Garden of Eden (c. 4000 BC) was located in Mesopotamia, somewhere between the rivers Tigris and Euphrates. 1

Adam and Eve, by ignorance, let sin enter the world and ultimately change God’s initial perfect plan. From this moment onwards, mankind would be at war against evil. (Genesis 1-3)
Hosea 4:6: My people are destroyed from lack of knowledge. Because you have rejected knowledge, I also reject you as my priests.

Having been made in God’s image, humans were meant to be His representatives on Earth; they were His priests. After sin, the only way for them to re-enter God’s grace and be in communion with Him again would be by retaining holiness. This close relationship, which once was easy, would now require sacrifice – work. Later this would be symbolized by actual animal sacrifices.

John 8:44: [Satan] was a murderer from the beginning, not holding to the truth, for there is no truth in him. When he lies, he speaks his native language, for he is a liar and the father of lies.

History categorizes the remaining actions of humanity in

(a) those following or believing Satan’s lies and

(b) those believing God and following Him.

God declared he would put enmity between Satan and humanity, through the Messiah. Satan would wound the Messiah but ultimately would be crushed by him. (Genesis 3)

Ever since this happened, it had been Satan’s primary job to discover who the seed of the Messiah is and destroy it. Adam and Eve had two sons, Cain and Abel. Cain killed Abel in jealousy, establishing a pattern of violence upon the Earth (c 3000 BC)

Bible Timeline and Ancient History – the beginning history of the World

When you follow the chronologies and lifespans mentioned in Genesis, it is possible to date the creation of the world at about 4004 BC. 2

NOAH’S ARK – the beginning history of the World 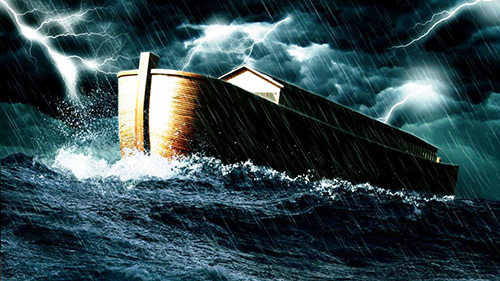 Generations later (c. 3000-2500 BC), mankind had, for the most part, degenerated into depravity. Noah was found to be a God-fearing man. God gave him the mandate to build an ark for Noah, his family and all the animals to escape the wrath that would cover the world in the form of a giant flood. The beginning history of the World records this natural disaster  in all initial civilizations.

After the flood, God blessed Noah’s sons Shem and Japheth but let Ham go on his way as he had chosen. From Noah’s sons came all the other nations of the world (Genesis 11). 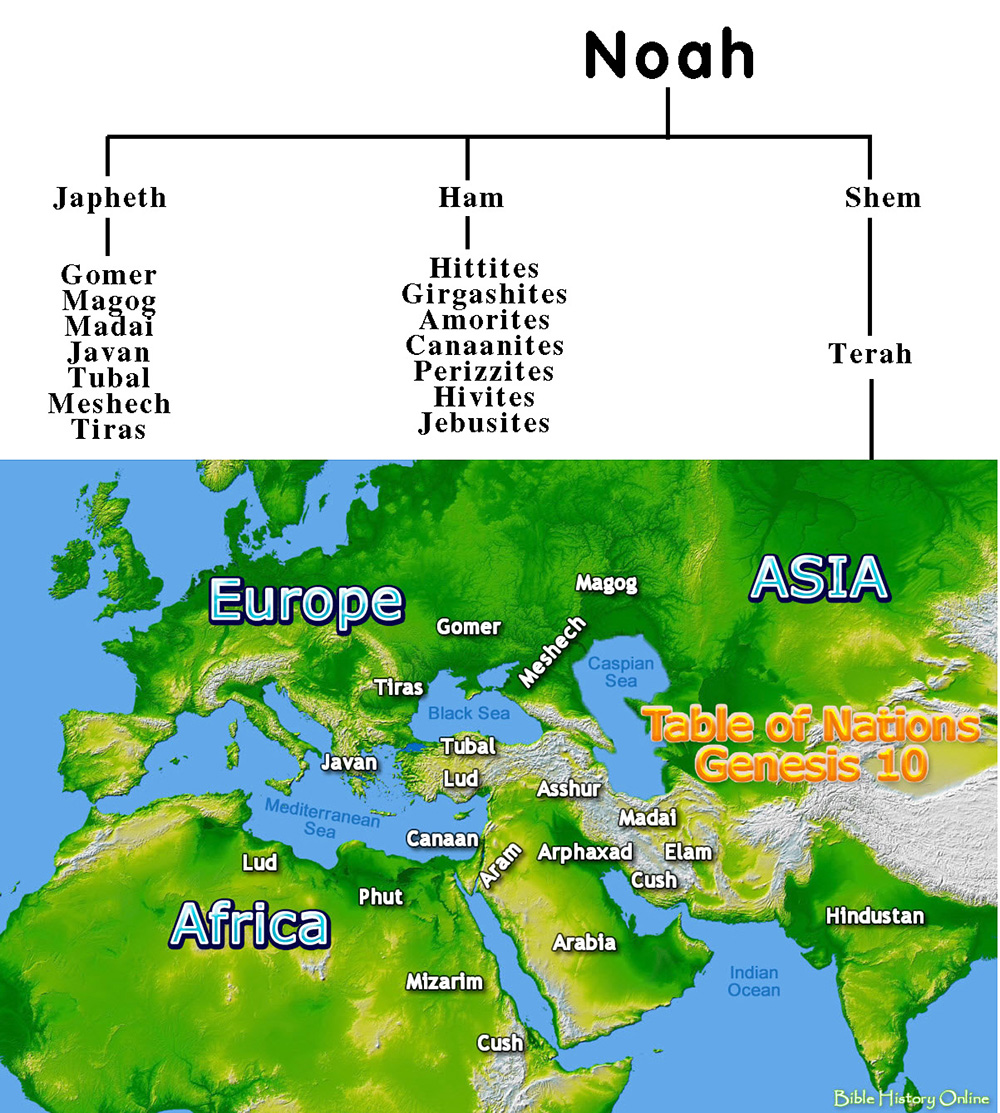 God promised Noah that never again would He destroy the world by water. One begs the question, would fire destroy it?
The Bible states that on the seventeenth day of the seventh month the ark came to rest on the mountains of Ararat (Genesis 4).3

Two thousand years later, the Hebrew nation would escape from Egypt on the seventh month, at which time God told them to establish a new calendar. The seventh month, Nissan then became the first month. This period works out so that it was on the 17th day of Nissan that Noah’s ark landed, marking a new beginning for humanity.

Jesus was crucified on the 14th day of Nissan, resurrected on the 17th. Also a new beginning for mankind.
Why would the rabbis put this story in the Old Testament? As far as we know the Jewish religion has not stumbled across this fact. It is evidence that God put it there, to make a clear indication to the Messiah. This happens numerous times in the Bible.

BIRTH of the NATIONS – the beginning history of the World

The Tower of Babel 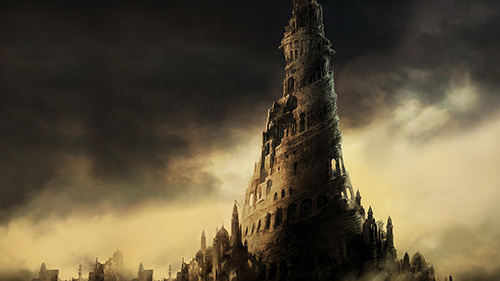 The Tower of Babel was a ziggurat built, probably a few hundred years after the flood, when the world was again more populated and, still, back into depravity. The people build a tower not to reach the heavens (as readers widely misunderstood) but to worship the heavens, i.e. unto the heavens.

The location is thought to be Babylon or, according to David Rohl, Eridu, which was the first city in history, much older than Babylon. The timeline may have been at the time of King Enmerkar around 2841 BC. 4.

Babel was, in fact, the pinnacle of human advancement with a diverse range of skills. God confused the people working in the tower by giving them different languages. The work was interrupted, and they dispersed. The significant outcome was that these workers were all highly skilled and when they arrived in the new lands, they were able to replace any inferior skills in their new homes with their superior cultures. Many of the organized civilizations around the world seemed to have appeared overnight.

First civilizations of the beginning history of the World 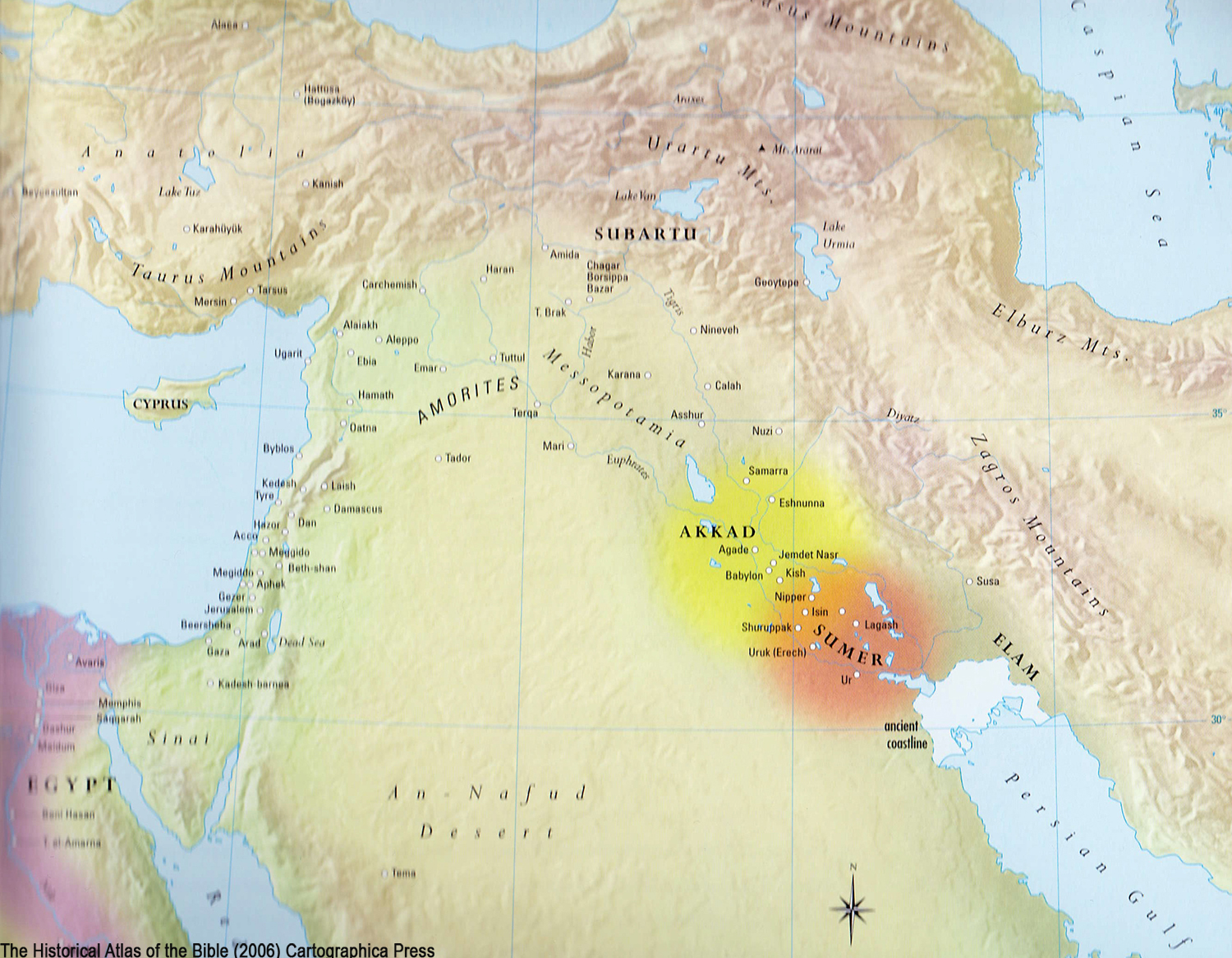 In the beginning history of the World, whereas in north Mesopotamia we have a continuous history of farming for thousands of years, in the Nile Valley that history only begins between 5500 and 4000 BC.

However, when we address more state-like developed civilizations, Egypt’s appears at almost precisely the same time as Mesopotamia, after 3000 BC. There is evidence that Mesopotamians migrated there by sea, from the Persian Gulf to the Red Sea. This movement of peoples is another example of the quick dispersion of nations after the Tower of Babel.

The ancient civilizations that well advanced have no record of how they got there. There is no gradual slow evolution to their status of developed culture, government, infrastructure and power. One day they were not there, the next day they were there. The implication is that only sudden migration from Babel can explain this. In fact, there has been a loss of technology in humanity over the years, which is why a modern Egyptian does not know how the pyramids were built.

The 3d Millennium BC was a period which saw the structuring of populations into cultures evident in:

(a) governments centralized under ruling elites,

Migration and trade at the beginning history of the World 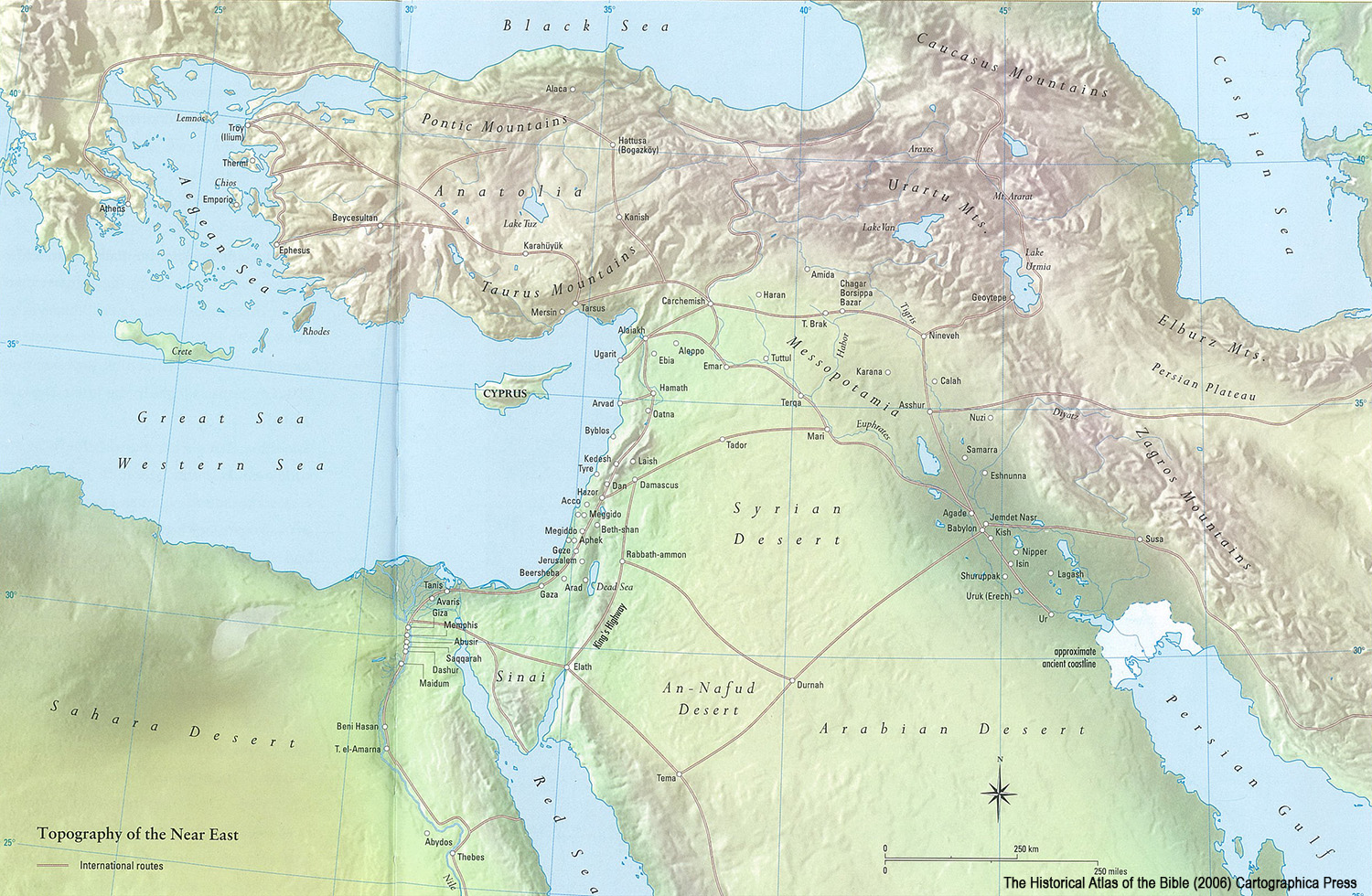 The vast floodplains of Mesopotamia, Egypt and the Indus Valley were the three great centres of natural sustenance and thus civilizations. In Egypt, the Lower and upper kingdoms were united in the first monarchy (28th Century BC). Mesopotamian civilization grew under Hammurabi (c 1565 BC). It is natural that over the millennia, history has summarized the events in the Middle East as oscillating between these two zones. Whether migratory or military, we observe the massive movement of populations and armies from one of these zones towards the other, from the time of Hyskos (14th Century BC) to Alexander the Great ( 323 BC).

By the 2nd Millennium BC there was ongoing relations between the kingdoms in form of:

(a) Trade of goods

(b) Spreading of different belief systems

In between those regions lay Canaan. This land was rich and fertile as it was the only land within that subcontinent (other than Mesopotamia or Egypt) to have enough rainfall to sustain a sizeable thriving population to support a nation.

The Hebrews are Semitic people descending most likely from the Amorites or Arameans who entered Palestine with the migration of Abraham from Ur (c. 1855 BC). 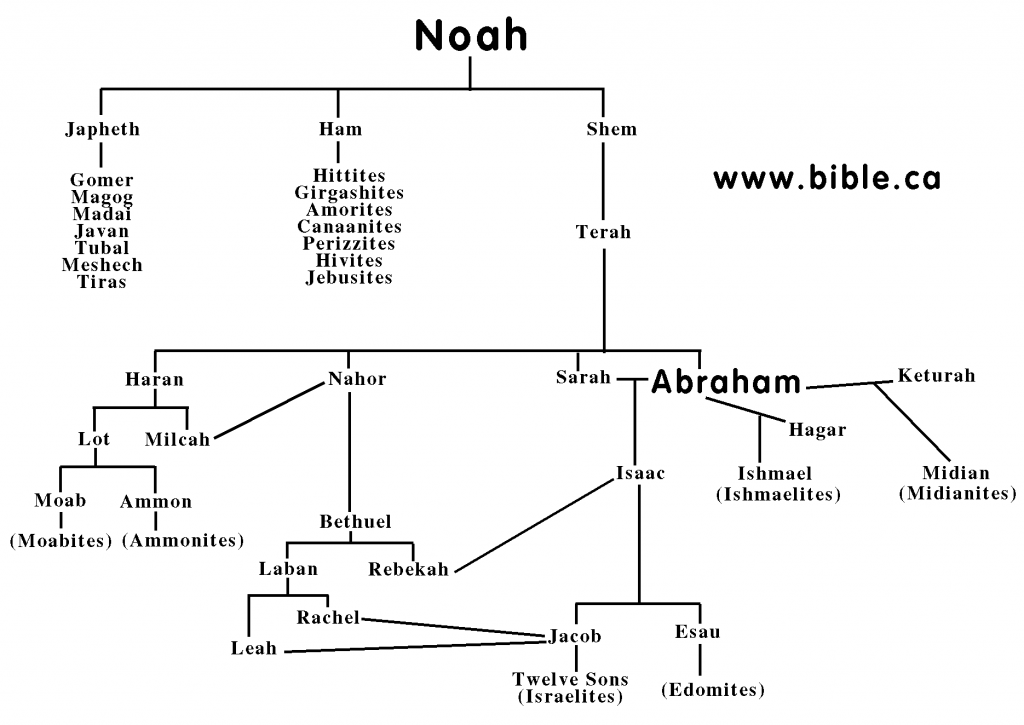 Blessed be God: creator of Heaven and Earth, who purges iniquity and creates new beginnings. 5

WORLD HISTORY TIMELINE at the Beginning of History 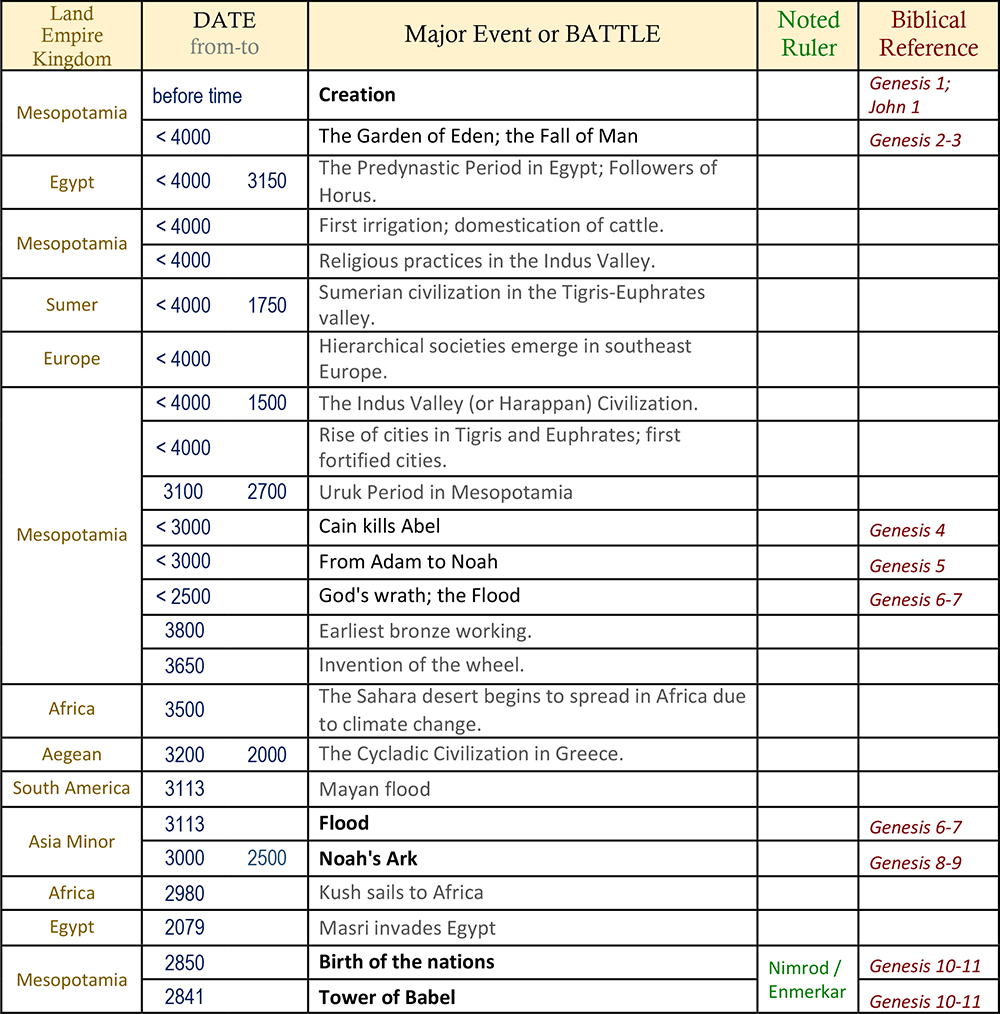 How Nations Began - Table of Nations - Dispersement of Nations