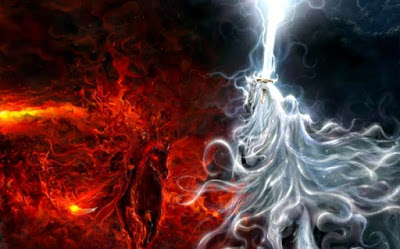 The Biblical and World wars and battles we analyze in God’s War Plan are but an extension of a deeper, greater spiritual warfare that has gone on for millennia. More important than the “how” or “where” of a fight is its outcome, and this is why this is guaranteed:

1. Satan has already been defeated

2. Our fight is not the fight against Satan

We fight the fight of faith. Satan wants to keep us out of the faith, leaving us to our weak worldly devices, so he can pounce and destroy us; destroy our will, our joy, our identity as followers of Christ. After that, any regular problems will be enough to oppress us.

God does not allow problems to oppress the believer who stands strong. The believer allows oppression by his disobedience, lack of faith, sin and so on. If we’re in the will of God there is provision.

Psalm 21:1-13: [1] The king rejoices in your strength, Lord. How great is his joy in the victories you give! [2] You have granted him his heart’s desire and have not withheld the request of his lips. [3] You came to greet him with rich blessings and placed a crown of pure gold on his head. [4] He asked you for life, and you gave it to him—length of days, for ever and ever. [5] Through the victories you gave, his glory is great; you have bestowed on him splendor and majesty. [6] Surely you have granted him unending blessings and made him glad with the joy of your presence. [7] For the king trusts in the Lord; through the unfailing love of the Most High he will not be shaken. [8] Your hand will lay hold on all your enemies; your right hand will seize your foes. [9] When you appear for battle, you will burn them up as in a blazing furnace. The Lord will swallow them up in his wrath, and his fire will consume them. [10] You will destroy their descendants from the earth, their posterity from mankind. [11] Though they plot evil against you and devise wicked schemes, they cannot succeed. [12] You will make them turn their backs when you aim at them with drawn bow. [13] Be exalted in your strength, Lord; we will sing and praise your might.

More than anything, in reporting on the over 100 battles in the Bible, God’s War Plan is meant to serve as witness to God’s victory and give the world hope in these dark times. For some, this is aimed at fortifying their faith, to others it is to show that there is a God.

God’s title “God of hosts” signifies His absolute command over the natural creation as well as the heavenly hosts of angels and armies of Heaven.

6. God does the fighting for us

7. The Bible assures us of the outcome

And that trumps everything else!

For a while although I was studying spiritual or warfare I almost forgot that there are enemies and divisions of enemies when we fight. We get something we know we have God’s promise and we wonder why it’s not done or why it doesn’t manifest in the natural. We forget that we are in a fallen world we ourselves are the vessels of God’s will but are opposed by the forces in this fallen world. Just like a perfect plan of battle will bring victory it still has to be carried out in fonts and there will be casualties. The difference between that and the faithful is that we are assured of the victory no matter what we are sword of the perfect plan of God and believing that is what is supernatural and is what faith is.

[next time: “Headquarters in the Wilderness“]

The Leading of the Holy Spirit - our Commander in Chief