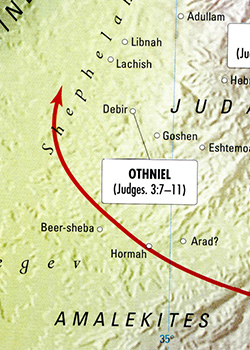 When King Cushan-Rishathaim of the Edomites attacked the Israelites, the Army of God did not put up a significant resistance. Consequently, they served the Edomites. While servitude was submissive defeat for the people of God, they were able to escape total destruction. Once the right leader arose from within they struck back. This man was Othniel, who became the first Judge of Israel, delivering the people from the Edomites.

ANCIENT HISTORY before Othniel against the Edomites 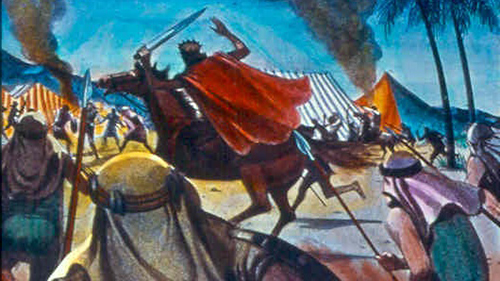 God can use bad things for good. He does not release bad things, but His permissive will does allow it. The fact that He will use something negative for a positive outcome is never to mean that He created the negative or that it was His intention. The Israelites were reaping what they sowed and embarked on a protracted conflict in the occupation of Canaan. An ancient war of attrition which would last generations.

Nevertheless, Scripture confirms, explicitly, that this served a beneficial purpose of training the Army of God in the advanced Canaanite warfare of the open field. It was a slow baptism of fire which saw ancient Israel develop into a tenacious fighting force finally on par with the sophisticated armies competing for supremacy in occupation of Canaan through the subsequent ages.

Military Strategy – Clear objectives in the occupation of Canaan

The objective of war is to destroy the enemy, not to take up land. During this early period of the the Book of Judges, the Israelites lost focus and did not follow the supreme commander’s instruction to annihilate all forces from the region. Instead, they used their energy to take more position. Bypassing strongholds has its place in short-term action; after all, fixed fortifications are inadequate and offer little recompense to an advancing army.

We cannot overlook the elimination of pockets of resistance in the long-term grand strategy. Eventually, the war grinds to a halt in the frontlines, and then the soldiers may be too tired to go back and fight the enemy that has remained behind the lines, preferring to compromise with their stay in the land as the Israelites did.

This accommodation guaranteed that the Israelites would not run out of enemies for a long time to come. Indeed, just in the third chapter of the Book of Judges, we see three different types of enemies: the Edomites, the people of Eglon and the Philistines.

CONFLICT BACKGROUND leading to Othniel against the Edomites 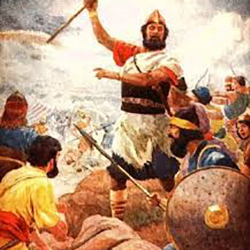 The People of Israel cried out to God and raised up Othniel as their new leader. God’s spirit came upon him, and he was able to mobilize Israel against the Aramean leader King Cushan-Rishathaim 1 of Aram Naharaim. Judges 3 introduces Cushan-Rishathaim as king of Mesopotamia although he may have been a king of Edom or Syria.

MILITARY HISTORY of Othniel against the Edomites

Israel served their enemy for eight years and then was delivered by Othniel. With victory came 40 years of peace.

A military commander must have the pulse of the men under him to be an active leader, which he does by being a good orator, particularly in antiquity. It was true of Alexander the Great, Julius Caesar, Napoleon Bonaparte and others. It is fair to say that Othniel was able to muster and lead a large group of men to fight because of this. We deduct this because Scripture implies that Othniel was able to sway the people to fight because of the guidance of God’s spirit. God’s spirit in the Old Testament is, of course, equivalent to the Holy Spirit in the New Testament. It is God’s spirit which tells the believer what to say in his most important crossroads.

Luke 12:11-12 [11] And when they bring you unto the synagogues, and unto magistrates, and powers, take ye no thought how or what thing ye shall answer, or what ye shall say: [12] For the Holy Ghost shall teach you in the same hour what ye ought to say.

Othniel was, notably, the nephew of Caleb; son of his brother Kenaz.

BIBLE HISTORY AFTERMATH of Othniel against the Edomites

It seems that the dust from the battle against the Edomites had not yet settled before the people returned to the worship of evil. This choice was the direct spiritual cause of the period of oppression under King Eglon.

SPIRITUAL WARFARE in Othniel against the Edomites

During the period described at the beginning of the Book of Judges, the Canaanite groups were ever more divided and dwindled in numbers. Under these conditions, it should have been easy for the Israelites to subdue them. Nevertheless, we see decades of subjugation from the Canaanites over the Israelites. God’s people had not been following His precepts and, as a result, they became weakened nearly to the point of ridicule.

As soon as the Israelites were back to following God they were made strong again. Many Christians suffer unnecessarily because they do not do the bare basics of daily devotion to God by reading their Bible and praying.

BREAKING WITH THE PAST

The Amalekites, Edomites and other peoples from the east of the Jordan kept attacking Israel and often defeating. This is because Israel did not deal with their past. While they were not supposed to necessarily eliminate these peoples they were to go to the west of the Jordan stay there.

A believer is not supposed to eliminate his past life, but Salvation washes away past sins. Temptation will not pose a threat if we stay in God’s perfect plan. For Israel, at this time, this was God’s war plan and His spiritual plan. If we look too often to the past too often, it may come back and tempt us. If we are not prepared we can fall back into it.

BIBLE BATTLE on LOCATION around Othniel against the Edomites 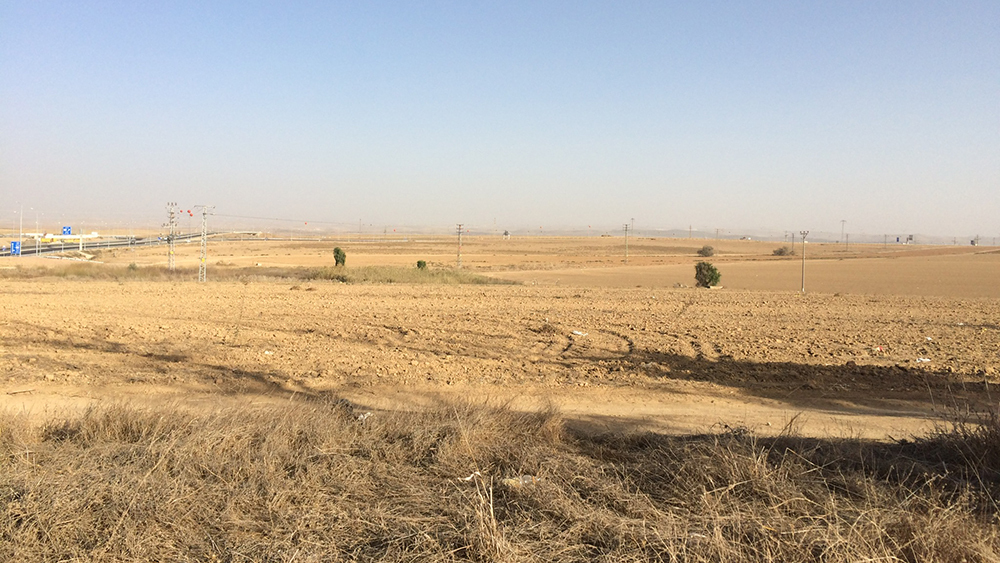 WORLD HISTORY TIMELINE during Othniel against the Edomites