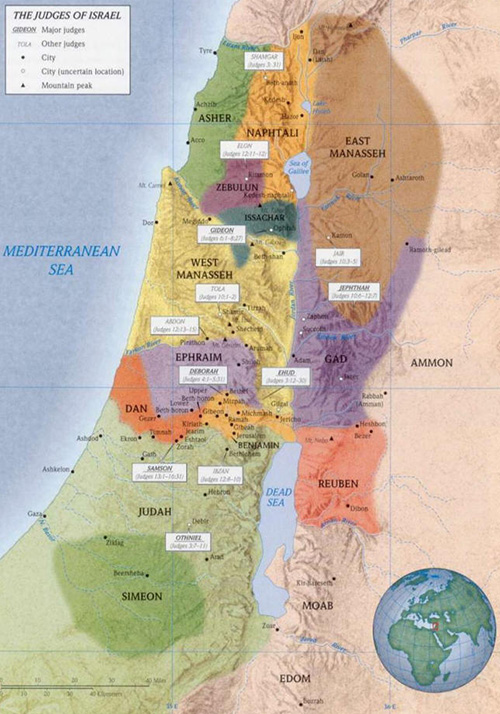 From the beginning, we have great leaders of the people such as Abraham, Joseph, Moses, and Joshua. After these role models are gone, Israel has 15 Judges in this historical account. These are caretakers of the people and the closest they have to political leaders. Nevertheless, the nation goes from conquest to compromise to rebellion to retribution to chaos. 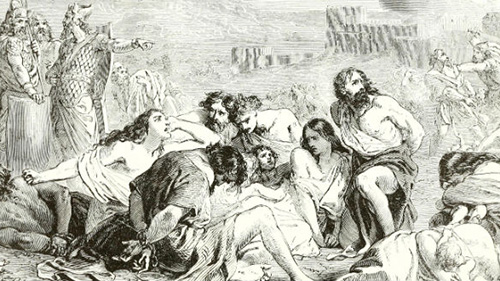 When you’re going through a period of lack, danger and adversity, you are quick to ask God for help. Sometimes when the blessings abound the enemy will urge you to forget about him, which is what happened with the Israelites in this period.

The Book of Judges narrates a tumultuous and very volatile political climate that the people of Israel had to endure. It is a timeline falling between nomadic Israel and Royal Israel. The pre-Davidic time was a dangerous period where the nation could have ceased to exist. Even the deportations to Assyria and Babylon were not as life-threatening to Israel as this period mentioned in the Book of Judges; perhaps because by the time of the exiles, the nation was older and well established while at the time following the death of Joshua they were new arrivals to a new Promised Land. The Israelites could have been quickly wiped out or completely taken over, culturally by their enemies; and they almost did.

On the one hand, the occupation of Canaan was far from complete by the end of the Book of Joshua; this was in part because of disobedience from the people for if they had observed God’s precepts thoroughly, then they would have had complete victory. On another hand the Army of God had to defend the territory that they had gained from succumbing to invading tribes – this problem persists today in part because of lack of revelation about the Messiah. These enemy tribes took advantage of the fragile adaptation of the Hebrews into Canaan. It was a period of uncertainty:

North America finds itself at this junction for a few decades now. While the United States and Canada were nations created under God now they are systematically extinguishing God from their institutions and ideals.

“The Puzzle is why so many people live so badly. Not so wickedly, but so inanely. Not so cruelly, but so stupidly. There is little to admire and less to imitate in the people who are prominent in our culture. We have celebrities but not saints. Famous entertainers amuse a nation of bored insomniacs. Infamous criminals act out the aggressions of timid conformists. Petulant and spoiled athletes play games vicariously for lazy and apathetic spectators. People, aimless and bored, amuse themselves with trivia and trash. Neither the adventure of goodness nor the pursuit of righteousness gets headlines.”1

The death of Joshua signalled the end of healthy, central spiritual leadership. The Book of Judges essentially lists the leaders which God used to save his people from trouble. There is a constant resurgence of oppressors throughout The Book of Judges which must be defeated.

Judges were graced with the qualities:

There were significant judges and minor judges. The latter did not have military commissions.

The period between 1406 and 1375 BC is one of defeat which God allowed befall His people God due to their disobedience.

Nevertheless, His mercy is great, and He did not forsake them entirely. Although the people had rejected His guidance, God knew that without some form of leadership they would plunge into chaos. For this, He raised up judges to watch over them over the years. It was not the perfect arrangement, but it was better than total lawlessness.

What took place during this season can be summarized as follows: When the people listen to the judge over them, they prospered, when they did not they failed.

There are seven sin cycles in the Book of Judges which led God’s people from conquest, to compromise, to a conquered people. 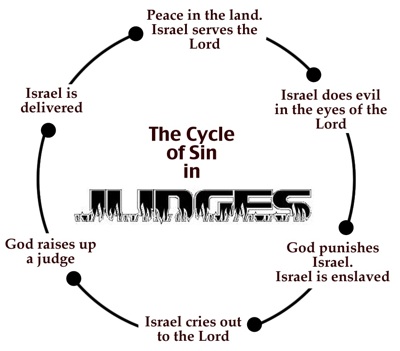 Ancient War – A Confederation of the Tribes of Israel 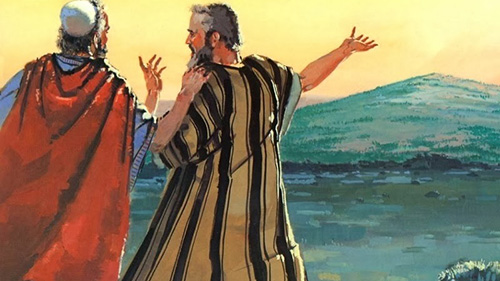 The Book of Judges is a collects narratives of heroes and foes during a transition period which started after the Israelite Invasion of Canaan. During this time Israel was already a nation but not yet a kingdom. It was a confederation of independent tribes.

The only thing holding them together was faith in God, and their religious festivals and place of worship – Gilgal and Shiloh – where the Ark of the covenant was kept reflect this. When the people’s dedication to the Lord went, so went their cultural, political and, particularly direful, military integrity.

The tribes would gather under one of their Judges, which was a leader of one of the tribes, to carry out a holy war. While their mutual defence was generally effective against local invading powers, it was not up to par when imperial armies came into the picture. They were major judges and minor judges. The latter did not command armies.

This metastasis from Joshua to Judges is, however, on the whole, a regression instead of evolution. It was a shift from conquest to compromise. From compromise, it goes to rebellion, retribution and chaos.

Although the Book of Judges covers about 410 years, it is difficult to ascertain the exact period or chronological order, chiefly because some judges were leaders of particular tribes or regions and may have contemporarily overlapped with other judges. 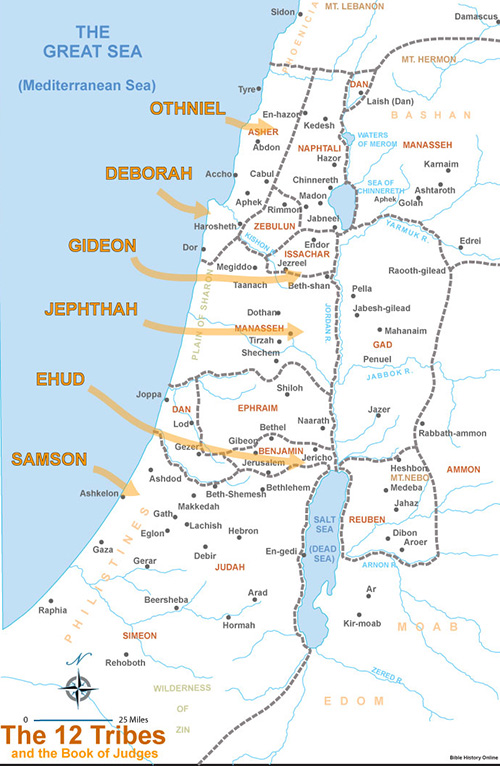 The original generation which had crossed into the Promised Land had a taste of God’s power. The same happened in Egypt, with Joseph’s generation. The problem was that those generations did not transfer the spiritual lessons to the succeeding generation. Stories will never beat experience. “The key is when the second generation becomes its first generation […]. They experience God firsthand in their generation, in their way, in their culture.”2

Matthew 13:24-30 NRSV [24] He put before them another parable: “The kingdom of heaven may be compared to someone who sowed good seed in his field; [25] but while everybody was asleep, an enemy came and sowed weeds among the wheat, and then 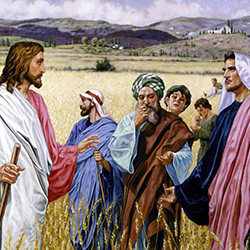 went away. [26] So when the plants came up and bore grain, then the weeds appeared as well. [27] And the slaves of the householder came and said to him, ‘Master, did you not sow good seed in your field? Where, then, did these weeds come from?’ [28] He answered, ‘An enemy has done this.’ The slaves said to him, ‘Then do you want us to go and gather them?’ [29] But he replied, ‘No; for in gathering the weeds you would uproot the wheat along with them. [30] Let both of them grow together until the harvest; and at harvest time I will tell the reapers, Collect the weeds first and bind them in bundles to be burned, but gather the wheat into my barn.'”

The Israelites “slept” by disregarding God’s word, which is why Joshua meditated on the word day and night (Joshua 1:8) – so that he would not sleep and let the enemy come to steal it.

Bible Prophecy – The weeds that remained

If the people had listened to God, He would have delivered them. The military challenges before the Israelites were insurmountable in the natural realm. The challenges had been so from the first time they crossed the Jordan into Canaan to attack the giants at Jericho. Decades later nothing had changed. The Canaanite expulsion proved as difficult as taking the Promised Land in the first game place.

Only God could supernaturally make the difference. However, the people could only benefit from God’s help if they were unhindered by sin, which they had by disobeying and settling for less: settling for cohabitation with the Cis-Jordanian population in the place of total victory.

As it is, God left these enemies to test Israel (Judges 3):

On the one hand, they would serve the practical purpose of an authentic military training for new generations of God’s Army. Unfortunately, however, the Israelites continued to live among them, intermarrying and taking up pagan worship.

Military Strategy – Geography of the Campaigns

The battles in the Book of Judges constitute three separate campaigns in the South, Centre and North of the Promised Land. 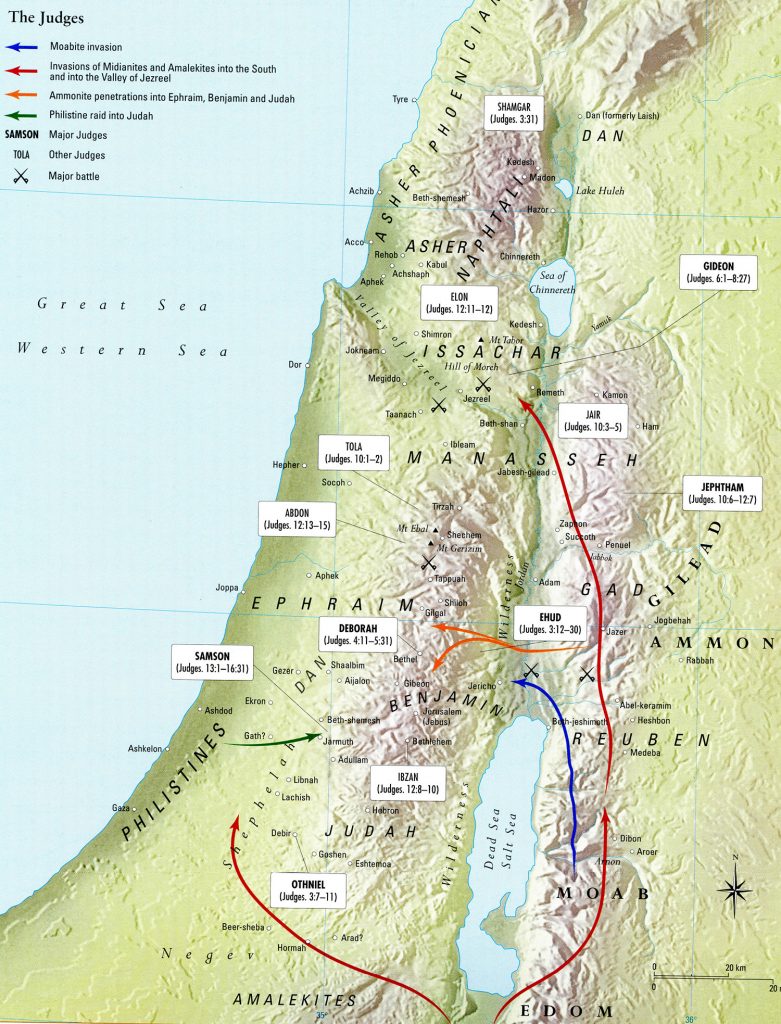 “Mighty God, whose existence spans eternity, your throne is set for judgment, but because of your grace, those who are clothed in your righteousness shall be passed over. In uprightness, you shall judge the wicked, but the works of the righteous shall be weighed by fire for rewards. Your mercy is to the righteous an open sky of hope, my Lord, and cause for great rejoicing.”6