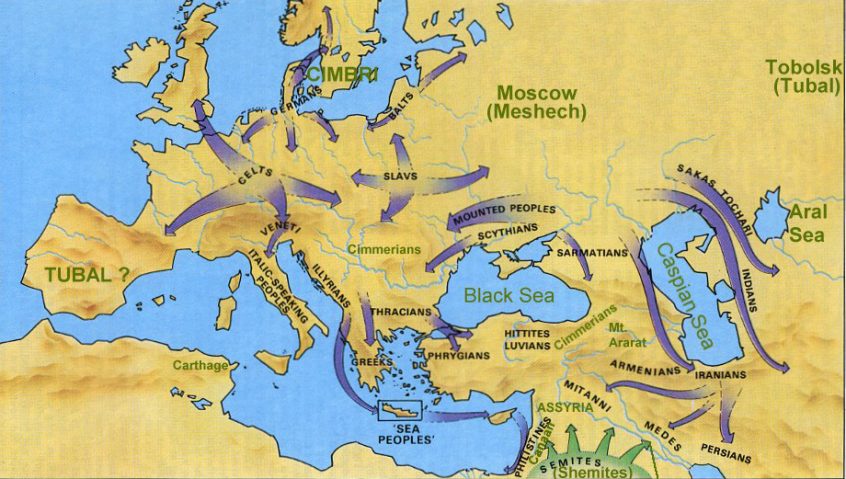 Before our first battle analysis but I realized I had to mention this most important topic of how the nations began. This is the Table of Nations in Genesis 10. As we are especially focused on a Biblical geo-political analysis, it is vital that we speak of this.

Professor William Albright said that Genesis 10 “stands absolutely alone in ancient literature, without a remote parallel, even among the Greeks, where we find the closest approach to a distribution of peoples in genealogical framework […] the Table of Nations remains an astonishingly accurate document.”

WHY DO WE WORSHIP a JEWISH GOD? 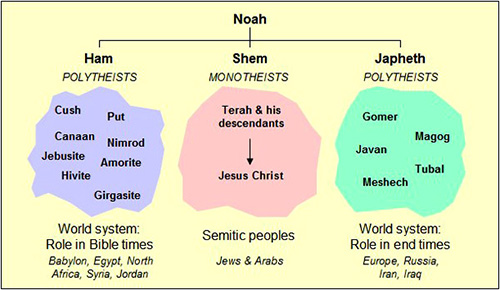 Many of us have wondered why we worship a Jewish God. Indeed, Jesus was Jewish, and we know of his roots. But we ask, what of the other nations. Didn’t God care for them? The answer is yes, of course, God cares. But God chose to reveal himself in our dimension, in our time, on our planet. God also functions through the family, which He established. Therefore God decided to present himself and act in partnership with the one people that would worship and follow Him. These were the Hebrews (descendants of Eber, son of Shelach, son of Arphaxad, son Shem, son of Noah).

WHAT of the OTHER NATIONS? 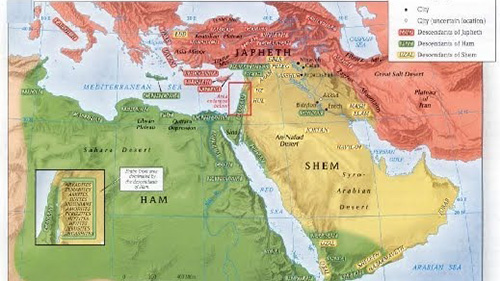 God scattered the remaining ethnic groups after Babel. Nevertheless, He will restore all nations to Himself at the end of time. Here is a brief account of their origins.

The following is a mixture of biblical accounts, historical record and archaeological evidence. When these three are in agreement theologians can present the following history of the birth of our present civilization.

How the nations began can be explained by Noah’s three sons Shem, Ham and Japheth. They were the ancestors of the today’s population.

Noah’s Ark landed on Mount Ararat in Turkey, previously known as Anatolia, or Asia Minor. All serious archaeological evidence points to this site being the origin of the second civilization after the flood.

SHEM – how the nations began in ASIA 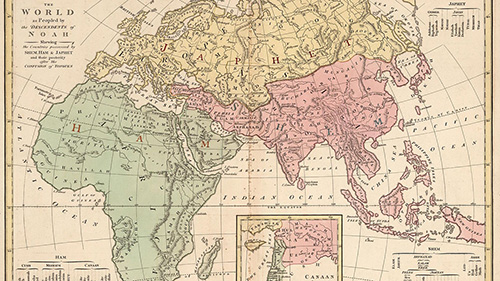 Belief: Monotheistic. They were the only people to believe in one God. Jesus would descend from Shem and this is why God would later protect a group of its peoples, the Hebrews , to safeguard the Messiah’s base.

Name: “a step” or “strong” Ashur was deified and worshiped as a God by many cultures.

The Assyrians were known as the master race. Their kings called Shar Kishshati were the forerunners of other lines of rulers such as the Shas, Caesars, Tzars and Kaisers.

The Hindus did not like the Assyrian worshippers of Ashur. The Cast System in India may have developed out of the division of the lighter skinned Assyrian master race and the darker skinned Indians.

The Persians on the other hand were amicable with the Assyrians.

The Assyrians migrated to Germany and, in 612 BC, when their empire was defeated they assimilated with the surrounding peoples. The Romans would call them Germani (the “genuine ones”). They move also into Turkey. They are also listed among the Gauls in France.

In AD 4oo the Assyrians are part of the invasion of Europe by the Vandals, Alans, Saxons and Allemandi. Moving into Germany they produce the Franks (French). The Franci and Saxons invade Gaul and later the Anglo-Saxons invade Britain.

Notables: King Enmerkar is believed to be King Nimrod in Genesis. He gathered materials to build the ziggurat which was to become the Tower of Babel which was the Bible episode of how the nations began and then dispersed.

Name: “I shall fail”

Children: Shelach – produced Eber, who became he father of the Hebrews. Other children were Anar and Ashcol.

Arphaxad begot Salah, and Salah begot Eber. To Eber were born two sons: the name of one was Peleg,

Notables: Abraham, Judah and remaining genealogy of the Bible until Jesus.

Name: “strife” Known for their white skin and their skill as archers.

How the nations began in the Mediterranean area: Lud migrated to North Italy with the Etruscans which would found the Roman Empire.

Chul – Armenia (732 BC); descendants, the Halani, were handsome, tall and blonde.

Gather – Bactreans; Goths (2000 BC); moved to Black Sea and Baltic (100 BC – AD 100); West branch were Visigoths which steeled into the Iberian Peninsula; the East branch settled in Austria and Scandinavia from where the Vikings originated.

Mash – lived near the Elamites in Iran, moved to southern Russia and Poland.

Origin of the Aramaeic language that Jesus spoke. They were taken captive by Assyrians and moved to Iran.

HAM – how the nations began in AFRICA 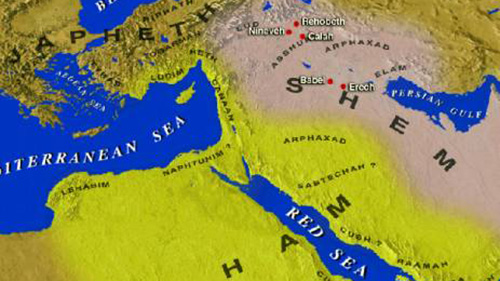 Peoples: father of the Mongoloid and Negroid races – Hamites.

Other groups: There were the African Cushites and the Asian Cushites. Among other descendants were Nubians, Ethiopians, Sudanese, Ghanaians, Africans, Bushmen, Pygmies, Australian Aborignies, New Guineans.

Notables: King Nimrod/Enmerkar who built the Tower of Babel.

They ended up in Egypt and Libya.

The Caphtorim ended up in Crete and Greece.

Notables: the first Egyptian dynasty was the Horus Kings. Horus was also the falcon god of the Sun. There is an ancient account of tis kingdom being born out of the water with a symbol of the falcon which had a reed in its mouth just as the biblical account of the dove carrying an olive branch.

They settled in the Middle East and Turkey.

Hittites (1700-1180 BC) – were to have one of the first major kingdoms, best known for confronting the Egyptians.

Sinites – worshiped the moon; settled in Arabia where they worshiped an ancestor who gave them the law. Moses would come later to Sinai and receive the real law (from God, rather than ancestors). The Sinites are also the ancestors of the Chinese (“China” = “Father Sin) in 2600 BC.

JAPHETH – how the nations began in EUROPE 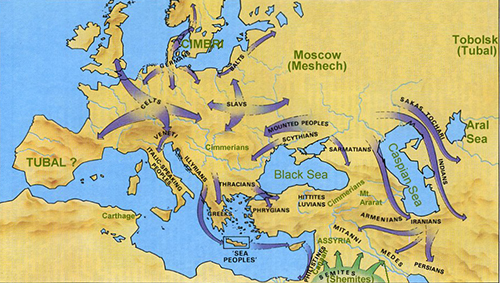 The Hindu accounts that lead to the belief of Karma which is based on the distinction between the inferior dark skinned Ham, whose father was cursed for laughing at his father’s drunkenness and the superior white skinned Japheth. This is the basis of the how the nations began in what is known today as the Indian Subcontinent leading to the Hindu Caste System.

Groups: Galatians (Turkey) or Gomerryans which were defeated in 677 BC and moved to Crimea in the Black Sea. Others moved west to become the Gauls (France) and Celtae (Britain).

Elisha – tribe of Milyaes went east to Himalayas, Malasya and islands including Polynesia.

Moved into the Black Sea, Danube, Ukraine, Persia and India.

Moved into the Hittite Empire territory when it collapsed in 1200 BC.

Moved into Crete, Macedonia, Yuguslavia and Americas (many of the North American Indian tribes derive their names from Aegean island names).

My Lord and my God: You have caused yourt creation to flourish even in the city where food is not grown. Shurely your Name shall endure forever, and forever it shall be celebrated. Multitudes are blessed in you daily, and people of all nations call you blessed. Lord God: God of Israel and of the blood-washed: The wondrous things you do, no one else can. Blessed is your glorious Name for ever. The whole Eaerth is filled with your glory, My Lord, and it is marvellous. 1