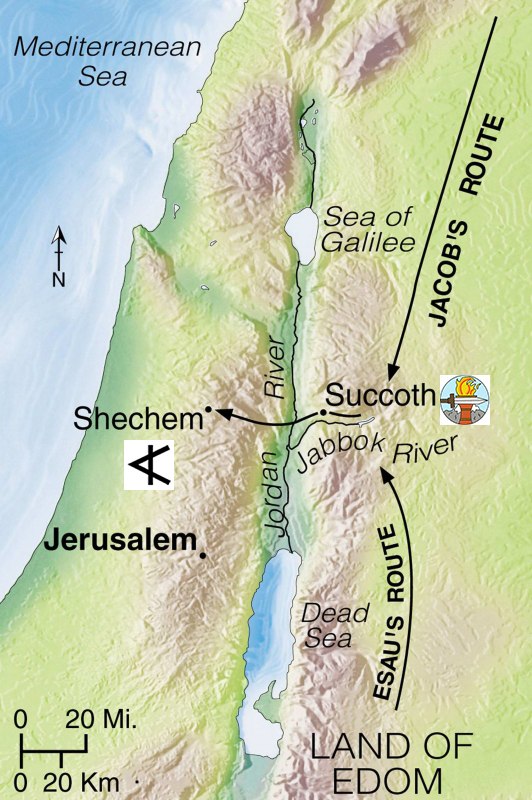 The attack on the citizens of Shechem was an act of revenge by the brothers of Dinah after her rape. This action had severe historical repercussions over the tribes of Israel that would continue to be evident for generations. A peculiar aspect of this Bible battle is the use of the consecrated act of circumcision as an authentic military operation (to force the term). 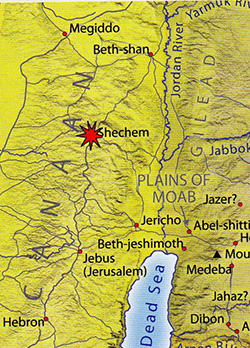 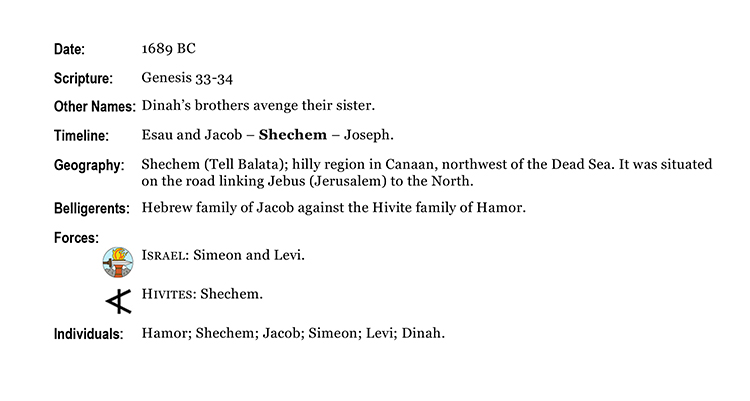 ANCIENT HISTORY before the Attack on Shechem

Although Abraham and his wife Sarah were very old, God had promised them, children. Abraham, however, did not trust that his wife could bear children and so he slept with his servant Hagar and Ishmael was born. Abraham’s instance of disobedience would have long-lasting future implications:

Later, Sarah did conceive a son called Isaac was born. When Isaac was older, God told Abraham to sacrifice him but stopped him at the last moment, as this was a test of Abraham’s devotion. The act took place on top of Mount Moriah. 1

Isaac married Rebekah, and they too had difficulty in having children, but God blessed them with twins. These were to be two nations intertwined even if opposed. Jacob and Esau were the patriarchs of the Jews and the Arabs and the exact origin of this conflict (Genesis 25).

Years later Esau, the oldest, sold his birthright to Jacob. Esau did not care for God showed himself to be weak and disrespectful of authority. His birthright was not his to give away. Esau was also worldly by marrying a Canaanite woman. God had forbidden the descendantsof Abraham to intermingle with Canaanites, the descendants of Ham (Noah’s son). God would not allow the future Messiah’s bloodline to pass through the people He had cursed.

After a hard life of servitude and wondering, Jacob married and was ready to start a family. At Jabbok River he wrestled with an angel of God. For his boldness, he was given the name Israel (he who wrestles with God). 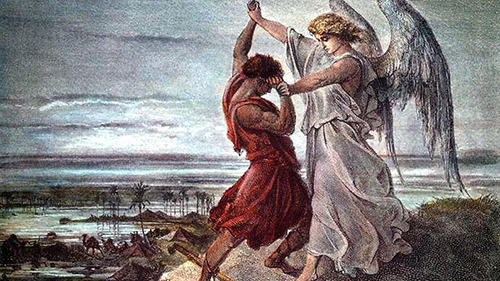 Around 1689 BC Jacob met his brother Esau at Succoth and, after an extended period of resentment from Esau, they reconciled and decided to share the land among their families. At first, Jacob was so afraid of Esau, despite an army of angels that was there to protect him that he named the place Mahanaim, which means “second army.” 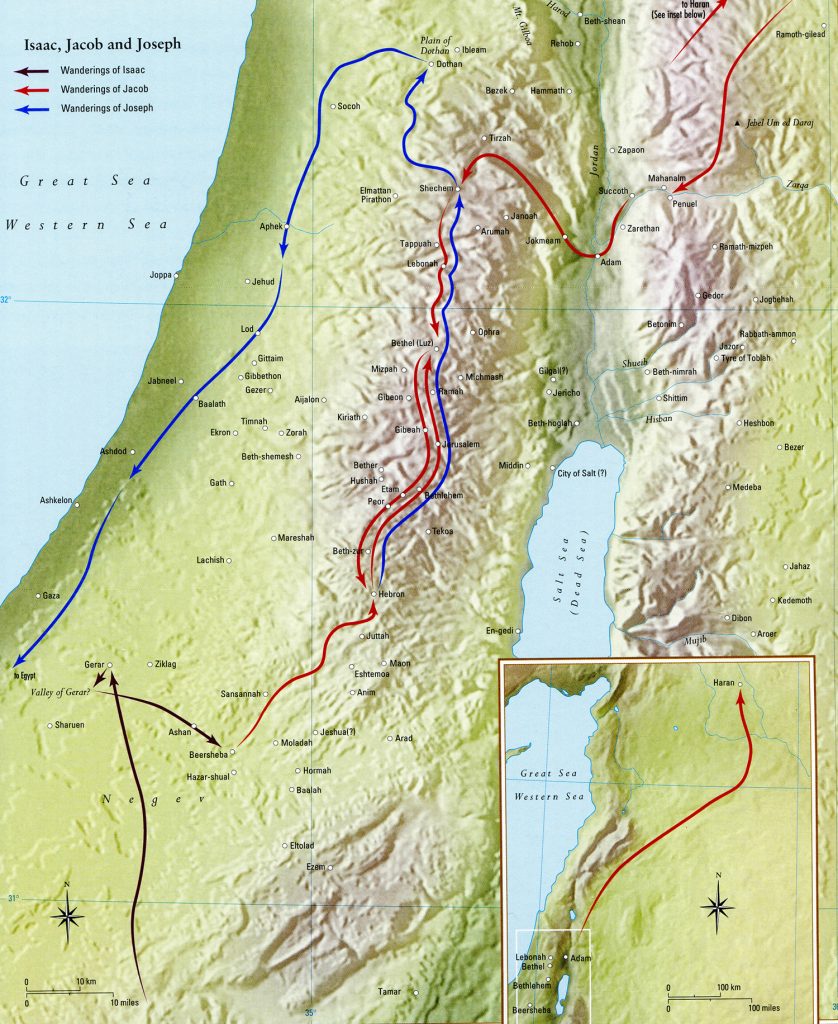 CONFLICT BACKGROUND leading to the Attack on Shechem

When the families joined Esau was moved by the blessing which God had bestowed on his brother Jacob, including the size of his family. Jacob offered some of his wealth to Esau.

Jacob then moved from Paddan Aram to the city of Shechem among the Hivites, in Canaan, and camped within sight of the city. He purchased a plot of land from the local Hivite chieftain Shechem and his brothers, sons of Hamor. Hamor was the land’s patriarch (Judges 9:28). Jacob set up an altar calling it El Elohe Israel (mighty is the God of Israel).

Soon after, Jacob’s Daughter Dinah was raped by Shechem, which later fell in love with her. Jacob and his sons, Levi and Simeon, found out about this tragedy. Hamor, requested a marriage between Shechem and Dinah. No doubt in the way of some compensation, the chieftain offered the highest price for Dinah and opened up his Hivite family to Jacob’s.

Although this idea of intermarriage was intolerable to the Hebrews, let alone the rape, Levi and Simeon contained their rage and slowly plotted their revenge. They would accept the marriage offer on the condition that Shechem and the entire town would be circumcised to keep God’s traditions allegedly.

MILITARY HISTORY of the Attack on Shechem 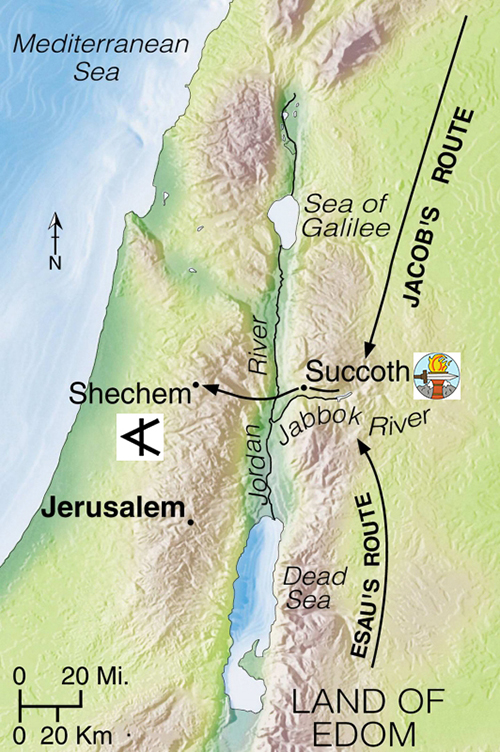 This small battle gives the term “military operation” a whole new tone. Simeon and Levi insisted on the circumcision of the Hamors. This operation left them physically weakened to defend themselves. One can say that flint knives and swords were the weapons used. 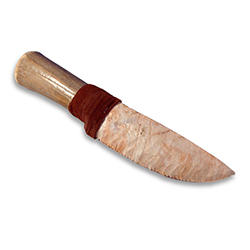 The negotiating that the Israelite brothers carried out was merely a deception. Three days after this, both brothers, despite their numerical disadvantage, were able to overpower the city and slaughter its inhabitants. They killed every male and took their sister Dinah. 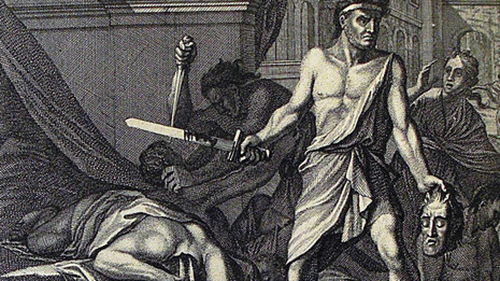 BIBLE HISTORY AFTERMATH of the Attack on Shechem

Levi and Simeon misused God’s holy circumcision for an evil end. Their revenge was an action of such violence and cunning that it resulted in future tribes descending from Simeon and Levi to be set aside and scattered within the nation of Israel. Simeon would eventually lose its identity altogether and be part of Judah.

SPIRITUAL WARFARE in the Attack on Shechem

Shechem abused his position of power to do as he pleased, thinking Jacob’s family would tolerate his whims. Slow to anger (James 1:19) has its advantages. It does not have to be synonymous with passive inaction. Instead of Dinah’s brothers rushing to avenge her with violence at the first opportunity they were slow to anger, waited, and planned a much better counter strike.

On the other hand, while God helped His children obtain justice, He does not want them to take it into their own hands this opening a lousy precedent.

The worst part of this conflict was that Levi and Simeon misused circumcision, which was an instruction God had given Abraham to set His people apart, holy. The brothers defiled it by using it for their small temporal victory.

Blessed you are, my wonderful God, for you have brought me into your house, even into your family, and given me your peace. 2

WORLD HISTORY TIMELINE at the Attack on Shechem 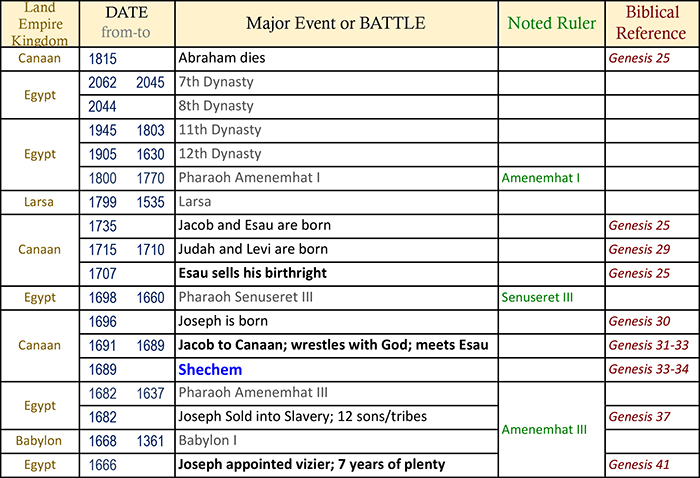 2 Comments on “Attack on SHECHEM | Genesis 34; rape of Dinah; Simeon and Levi; revenge”